The day of the competition, Max (Dave England) agrees to do an interview and photo shoot for an article Lennox (Patrick Gilmore) is composing at a time when he and Eddy (Jason Bothe) are supposed to be training their students. When he tells Eddy all about it beforehand, Eddy angrily tells him that he was being selfish again, just like in their prime days, and that was why he lost everything, including Danielle (Pascale Hutton).

Max doesn’t listen to him, but when he does the interview, he recalls how he focused more on drinking and partying than fulfilling his commitments to his sponsors or keeping himself on people’s good sides, and then when doing the photo shoot on his favorite mountain, Lennox tells him that his article is going to be called “Boarders Who Blew It,” and Kingsley (Tom Green) had suggested the title. Upon hearing this, Max finally understands that he did indeed ruin his life.

Later on, Eddy and the students – who had come to the mountain to have some fun before the competition – come across him. Max tells the kids that he knows now that he’s a loser, but though it sucked to lose his sponsors and his money, losing the chance to coach them would suck even worse. The gang soon affirms their support for him, and after they all have their fun on the mountain, they head back for the competition.

Despite performing very well, the Max & Eddy Snowboard Camp fails to make the medal standings. Danielle tells Kingsley that she was very impressed with the Camp’s efforts, and he responds by telling her that it was his idea for Lennox to do the “Boarders Who Blew It” article on Max, which visibly displeases her.

At the awards ceremony, Danielle announces that TSA will be representing the Max & Eddy Snowboard Camp for the next three years with full sponsorship from their top snowboard brands. Kingsley angrily questions this, prompting her to also announce that Kingsley was just about to propose marriage to her, but she was rejecting it. Max, Eddy, and their students push Kingsley and his lackey Spinks (Shane Meier) off of the stage and celebrate with Danielle and the crowd, and Kingsley leaves in a huff. 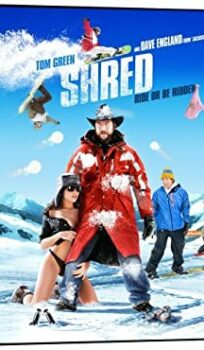