King Far Far Away (John Cleese) makes Shrek (Mike Myers) the new king, but Shrek wants no part in it, and sets out to find Arthur, who the King recommended before dying. As he departs, Fiona (Cameron Diaz) informs him that she is pregnant. Prince Charming (Rupert Everett) unites the villains of Fairy Tale land in a plot to overthrow the kingdom of Far Far Away so that he can take his rightful place as king. Meanwhile, Shrek, Donkey (Eddie Murphy), and Puss (Antonio Banderes) make it to Worcestershire to pick up a reluctant but willing Arthur (Justin Timberlake).

Charming and his crew invade Far Far Away and begin to reshape it for his own kingdom. Fiona, her mother, and the fairy tale princesses escape to the castle dungeon, but once they are out in the open, Rapunzel betrays them because she cut a deal with Charming (that she would be his queen).

Charming’s plan was to put on a performance in a play showing the kingdom that Shrek was out and he was in, just as Shrek and the crew make it back, thanks to some mismatched magic from Merlin (Eric Idle). Shrek is immediately arrested and used for the play, and Arthur runs away after Shrek says some harsh words to him. Arthur is later approached by Donkey and Puss, who tell him that had Shrek not done what he did, Charming would have killed him.

Charming’s play goes off, but is crashed by Fiona and her bunch, along with Donkey’s family, including Dragon and their halfbreed children.
Arthur also comes in and manages to turn all the villains around psychologically, except of course Charming, who attacks Shrek, but misses, and Shrek creates mayhem on stage, concluded by Rapunzel’s tower crashing on top of Charming. Arthur steps up and takes the crown as the new king of Far Far Away.

Shrek and Fiona return home to the swamp, where they raise their three newborn children together. 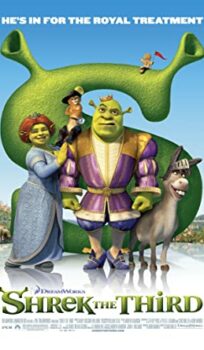