Pooper:
Girl eventually kills Montse, although the sisters reconcile before Montse dies. Girl drags a barely alive Carlos out of their flat and leaves him in the hallway while closing herself back in the flat, their respective fates left uncertain.

Long Ending:
Set in the 1940/50s. Two sisters, Montse (Macarena Gómez) and her younger sibling the Girl (Nadia de Santiago) live in a flat. Their mother died shortly after Girl was born, and their father (Luis Tosar) disappeared while serving in the war. Montse is deeply religious, suffers from mental illness, and is agoraphobic (i.e., having a deep fear of leaving her apartment). The women make ends meet by Montse designing and sewing dresses for a wealthy client who also supplies Montse with morphine, which helps keep Montse’s psychosis in check. Although Montse loves the Girl (now 18), she physically abuses Girl if the Girl disobeys her. Montse particularly becomes upset and lashes Girl’s hands open when she catches Girl flirting with a young man while Girl is out on a walk.

One day, while Girl is out, their upstairs neighbor Carlos (Hugo Silva) drunkenly falls down the stairs. He falls unconscious and breaks his leg. Montse, believing this is god’s will, drags Carlos into their apartment. She gives him morphine and binds his leg. When he awakens, she offers to care for him and lies that a doctor has seen Carlos and ordered him to stay in their flat until he recovers. Montse coerces Girl into not reporting her actions. Both sisters soon become attracted to the charming Carlos.

Montse is initially inspired by her attraction to Carlos to overcome her issues. She begins using exercises designed to have her overcome her agoraphobia and ignores the hallucinations she has of her menacing father. However, as Carlos’ condition worsens and he begs for her to call a real doctor, she becomes more possessive. Things get worse when police and Carlos’ fiancee show up (it’s revealed Carrlos knocked up his girlfriend and was injured while fleeing the night before their wedding, not wanting to commit to her) investigating his disappearance. Girl eventually tells Carlos’ fiancee that Carlos is trapped in their flat. The fiancee barges in and Montse kills her (perhaps by mistake) and then beats Carlos when he begins screaming.

Montse’s insanity grows and she gets more hallucinations of her father. Her client and the client’s daughter discover the fiancee’s corpse while in the flat for a dress fitting and Montse murders them too. When Carlos tries to flee, Montse beats him unconscious and then sews the flesh of his legs to the bed sheets to prevent another attempt. Although all of this occurs while Girl is out of the apartment, Girl comes home and witnesses the aftermath of the carnage.

Knowing things have gotten out of control, Montse calls Girl to her. She confides the truth about their family. When their mother died, their father went crazy. Their father eventually began raping Montse, believing her to look just like their mother. When the father began showing a sexual interest in Girl, Montse poisoned him and hid his body in a crawlspace in their flat. Girl is disgusted by her sister’s murder of their father (and the other women).

Girl tricks Montse into her room and locks her inside. She then cuts Carlos free and begins dragging him to the exit of their flat. Montse breaks out and attacks the pair. During the ensuing fight, Girl fatally stabs Montse with a butcher’s knife. As she slowly passes away, Montse reconciles with Girl. With Montse dead, Girl drags Carlos (who himself is nearly dead) out of the flat. The two kiss and Girl tells Carlos her name (which isn’t revealed to the viewer). As Carlos lies heavily wounded and barely breathing in the hallway, Girl returns to her flat and closes the door (leaving their respective fates unknown). 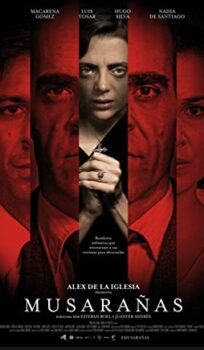