Alejandro (Benicio Del Toro) decides to go rogue and protect Isabela (Isabela Moner) when Matt orders him to kill her, as part of covering up the American involvement in the mission against the Mexican Cartels. Isabela runs away, while Alejandro follows after her and they both eventually catch up at the land of a poor, deaf Mexican farmer, who helps and feeds them. Matt decides to hunt them both in Mexico and gathers his team for it.

Alejandro makes the move of disguising both himself and Isabela as illegal immigrants to try and cross the border into the U.S. -because killing Isabela on American soil would create an international conflict-. They get made out by Miguel (Elijah Rodriguez), the fledgling teenage “coyote” from earlier in the film, who, in turn, betrays them to his boss, “Gallo” (Manuel Garcia Rulfo). They nonetheless get to do the bus trip; yet, upon arriving at the drop point from where everyone would continue on foot, Alejandro and Isabela are captured by Gallo’s gang. After a fellow initiating young member refuses to shoot a bound and gagged Alejandro and ends up himself killed, Miguel steps up and (hesitantly) shoots Alejandro, and everyone leaves him for dead.

Matt and his team catches up with the gangs, thanks to the tracking device Isabela had on her the whole time. Everyone -including Miguel’s cousin, Hector (David Castaneda)- gets bloodily gunned down and Matt recaptures Isabela, but decides to put her on Witness Protection, rather than undertake the execution order against her. We then discover that Alejandro wasn’t dead; he had only been shot through the jaw. He takes one of the gangs’ cars and drives off to the border (while murdering two other members who catch up with him on the way).

A year passes. Miguel, now visibly a full-blown “coyote”, comes up to the same Mexican restaurant that fronted for Gallo’s trafficking operations, only to find Alejandro waiting for him. Alejandro boards a surprised (yet not really scared) Miguel by asking him: “So, you wanna be a Sicario? Let’s talk about your future” and closes the door behind them, implying he’ll train the boy as part of getting revenge against the system who basically used him and left him to die… 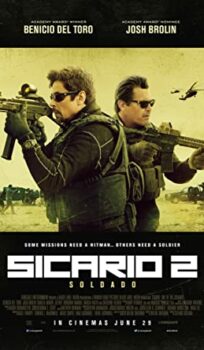