When Kate (Emily Blunt) insists on intervening in the operation Matt (Josh Brolin) and Alejandro (Benicio Del Toro) are conducting to raid the Sonora Cartel guys, Alejandro openly betrays her by shooting on her bulletproof vest when he gets a hold of -and takes off with- Silvio (Maximiliano Hernandez), a corrupt cop on the Sonora Cartel’s payroll.

Kate confronts Matt, who then reveals that the whole affair has a double purpose: one, to bring down the Sonora Cartel, thus balancing the drug trade by reducing the level of violence the existence of many rivaling Cartels carries along; and two, to give Alejandro -who used to be a lawyer for the Medellin Cartel and had his wife and daughter murdered by Sonora’s Fausto Alarcon (Julio César Cedillo)- the chance to get revenge.

In Mexico, Alejandro uses Silvio to get to Manuel Diaz (Bernardo Saracino); he kills Silvio, makes Diaz take him to Alarcon’s estate, murders many henchmen -and Diaz himself- at the estate and finally catches up to Alarcon while he dines with his family. After a brief, tense confrontation about assassinating families, Alejandro proclaims: “Now it’s time for you to meet God”; then, shoots and kills the wife and two kids before a stunned and terrified Alarcon, whom Alejandro also kills.

In the end, Alejandro forces Kate, at gunpoint, to sign a waiver that would sanction the whole operation as legitimate and necessary. Disgusted, after he departs, she goes to the balcony and aims her gun at him; he turns around and they exchange one last glance. She doesn’t harm him and he leaves. Meanwhile, in Sonora, Silvio’s widow and son go to a neighbourhood soccer game where the kid plays; they hear some brief gunfire in the distance -as an indicator of nothing really changing-, before carrying on. 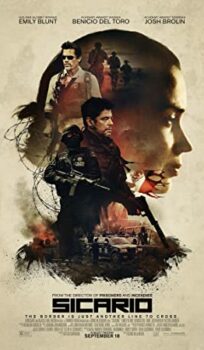