Ricky (Bill Moseley) pursues Laura (Samantha Scully) down into the basement, where she arms herself with a broom handle and then knocks the light out in an attempt to hit him with a surprise attack from the dark. The attack fails, and after he breaks the broom handle in two, he goes to kill her. However, her brother Chris (Eric Da Re) – who was stabbed by Ricky earlier on and presumed dead – shows up and shoots Ricky with a shotgun.

Ricky gets back up and proceeds to kill Chris by pressing the shotgun against his throat, choking him to death. This distraction gives Laura the chance to find one of the pieces of the broom handle, so when Ricky comes after her again, she impales him with it, stopping him but not killing him.

Lieutenant Connely (Robert Culp) arrives soon after with backup. Paramedics collect Ricky and rush him to the ICU at the hospital, and Connely puts Laura in his car. She wishes Connely a Merry Christmas, but as they drive away, a vision of Ricky appears on the screen, and he says “….and a Happy New Year.” 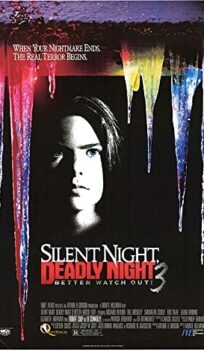