Even though he created them in the past, Joe Petto (Mickey Rooney) didn’t make the recent batch of killer toys – his son Pino (Brian Bremer) did. Pino is also a robotic doll that Joe created (out of grief over losing his wife and unborn son in a car crash years ago). Pino has been going around town wearing a face that he made to look like Joe to plant the killer toys. Joe eventually finds out what Pino is up to and becomes angry with him, but Pino – feeling that Joe would never see him like a real son – kills him.

Pino was trying to kill kids because he wanted a mom, and he figured that if he killed a kid, he’d be able to get their mom. He develops an interest in Sarah (Jane Higginson), but when he tries to kill her son Derek (William Thorne) with a killer toy, it fails.

One night, Pino kidnaps Derek and takes him to Joe’s toy store to lure Sarah to him. Noah (Tracy Fraim) – recently revealed to be Derek’s real father – arrives at the store before Sarah to save Derek, but Pino knocks him out. When Sarah arrives, she goes into the basement workshop, where she finds Joe’s body and encounters Pino. Pino explains his whole plan to her (and also – bizarrely – tries to rape her, which doesn’t work, since he lacks genitals) and then starts stabbing a bunch of toy sacks, hoping to get the one Derek was in and kill him. When he stabs Derek’s sack, Derek fights back, and then a revived Noah breaks in and starts fighting Pino. Before Pino can kill him, Sarah cuts him in half with an axe, and then soon after kills him by crushing his head.

As Noah, Sarah & Derek leave the basement, another robot doll’s eyes light up with electricity, and an evil laugh is heard…. 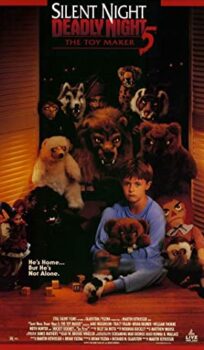