After killing a lot of people while dressed as Santa, Billy (Robert Brian Wilson) finally arrives at the orphanage to kill Mother Superior (Lilyan Chauvin). One of the kids, mistaking Billy for just an average Santa Claus, sees him and lets him in. As Billy raises his axe to kill Mother Superior in front of all of the kids, Captain Richards (H.E.D. Redford) arrives and fatally shoots him. Before Billy dies, he tells the kids “You’re safe now….Santa Claus….is gone.”

His brother Ricky (Alex Burton), who watched him die, looks down at his body, then coldly looks up at Mother Superior and says “Naughty!” 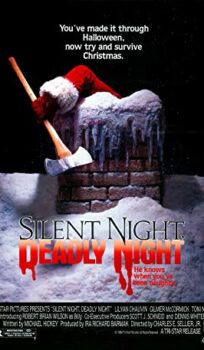