Probably the only Chuck Norris movie -or one of the very few ones, if not- where he doesn’t *quite* defeat the bad guy… and the only one where he did a little bit of something other than action and cheesy humor -horror, in this case-.

Short pooper:
Dan (Chuck Norris) fiercely confronts and fights psychotic and superhuman killer John (Brian Libby) until throwing him into a deep well. He walks away safely with his love interest Alison (Toni Kalem)… BUT, IN THE END, WE FIND OUT THAT JOHN DID NOT DIE.

Longer version:
John clings to the back of Dan’s jeep as he and Alison try to escape from him; using his inhuman strength, he manages to climb all the way, through the back window, to the front seat, which forces both Dan and Alison to jump off the vehicle, seconds before it crashes, flips and explodes, John, being unable to control it.

As John exits the burning wreckage, himself lit on fire, he jumps into a lake to put off the flames and then emerges at the same time Dan comes to see. Again, Dan and Alison try to run away until John eventually catches up with them; fed up, he decides to engage in a hand-to-hand fight with the deranged killer, with Alison watching from the side.

Despite John’s visible resilience and indestructibility, Dan manages to hit him several times and, eventually, uses (Chuck Norris’s trademark) roundhouse kicking, to defeat him. He then grabs John and tosses him into a well -but not before John tries to pull Dan along and Alison intervenes to fend him off-, which does appear to kill him. Both alive and safe, Dan and Alison embrace and leave together.

The camera pans towards the interior of the well, and… SURPRISE, SURPRISE!! John bursts out of the water, still alive. 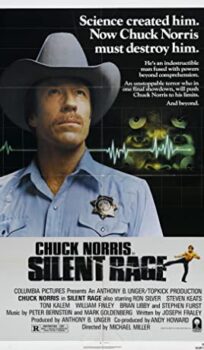