SHORT VERSION
Devereau and his henchmen are killed by the feds, but the train is a runaway.  George is able to separate the train cars from the engine before it crashes into the station.

LONG VERSION
George Caldwell (Gene Wilder) is a book publisher who is traveling from Los Angeles to Chicago on the Silver Streak train for his sister’s wedding.  On board, he has drinks with vitamin salesman Bob Sweet (Ned Beatty) and dinner with Hilly Burns (Jill Clayburgh).  Hilly is the assistant to Professor Schreiner, an art historian who just wrote a book about Rembrandt.  George and Hilly go back to their rooms (they have adjoining suites with a divider separating their rooms) and are about to have sex when George sees Professor Schreiner through the window being pushed off the top of the train.  The next morning, George sees the professor’s book and recognizes the picture of the author as the man he saw fall from the train.  Hilly tells George to visit the professor in his room.  He does, and is met by two henchmen (Ray Walston, Richard Kiel) who are searching the room.  George is then thrown off of the train.

With the help of a local woman pilot, George is able to get back on the train at the next stop.  It’s at this time that George learns that Bob Sweet is actually Bob Stevens, an FBI agent investigating art dealer Roger Devereau (Patrick McGoohan).  Devereau is about to be outed as an art forger in the professor’s book, and it was his henchmen that killed the professor and threw George off of the train.  They are looking for “The Rembrandt Papers”, which will prove Devereau is crooked.  The papers are hiding inside Hilly’s copy of the book.  While passing through a tunnel, Stevens is killed by the same henchman that threw off George.  George takes Stevens’ gun and chases the henchman to the top of the train.  George shoots him, and he falls off the train, but George is knocked off the top of the train and cannot get back on before the train leaves him behind.  He goes to the local sheriff’s office, but the sheriff is about to arrest him for the murder of the agent.  George steals a police car and is about to travel to the next stop when he realizes that local thief Grover Muldoon (Richard Pryor) is in the backseat.

The duo travel to the next stop in Kansas City, where the local police are waiting for George.  Grover disguises George as a flamboyant black man to sneak him past the cops, and they are able to get on the train.  George is promptly taken to Devereau, where he and Hilly are waiting for him.  Devereau tells both George and Hilly that he has destroyed the Rembrandt Papers, and they will be killed and it will look like a murder/suicide between two lovers.  Grover then enters the room disguised as a porter and takes Devereau’s gun.  George and Grover then get in a gunfight with Devereau’s surviving henchmen, but when they run out of ammo, they jump off of the train.  They are then immediately arrested by a passing policeman.  But instead of going to jail, they are handed over to the feds, who tell George that they know he didn’t kill their agent.  The feds plan to stop the train before it reaches Chicago and arrest everyone involved.

At the last stop before Chicago, the feds order the train stopped and everyone evacuated.  Devereau and his henchmen then hijack the train and take off, during which they get in a gunfight with the feds.  Eventually, the henchmen and Devereau are all killed, but so is the engineer and the train is a runaway.  With no way of stopping the train, George, Grover, Hilly, and the conductor (who was still on board when the train was hijacked) separate the train cars from the engine just before it reaches Central Station in Chicago.  The station is evacuated just as the engine crashes into it, and the cars stop just before they reach the station.  As the movie ends, Grover steals a car and drives away, while George and Hilly kiss. 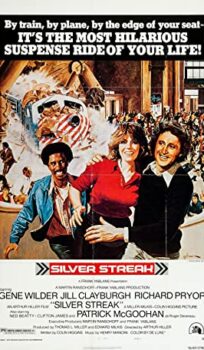