Pooper:
Simon seemingly strangles Noura to death, and then leaves France after Marianne won’t take him in. Simon sends another email asking his ex-girlfriend to give him another chance. Simon leaves France and it is suggested that Noura has survived the strangling (and has evidence to implicate Simon in his attempted murder of her).

Long Ending:
Simon (Brady Corbet) recently graduated college and has journeyed on his own to Paris. We learn that he was recently dumped by his girlfriend. It is clear he is not over the break-up, as he constantly emails and attempts to call her throughout the film. We learn that his girlfriend was terrified of Simon near the end of the relationship, although we are never told why. Simon also appears to lie about his college career to those he meets.

Simon spends most of his nights alone, wandering the city. One night, he is enticed into a brothel where he meets a prostitute named Victoria (Mati Diop). He purchases her time and he masturbates in front of her. Talking during the remaining time, Victoria notes that she is mistreated at the brothel. She also says Simon is younger and better looking than most of her clients. Simon begins paying her to provide her services outside of the brothel, and he always cuddles with her once they are done.

Simon soon concocts a plan to be with Victoria permanently. He stores his luggage at a family friend’s apartment and then picks a fight in the street and is severely beaten. He then goes to the brothel and Victoria, seeing his bruises, agrees to meet him after work. When she meets him, Simon says he was robbed of all his stuff. She takes pity on him and invites him to her apartment, where she patches him up. The two begin to bond, with Victoria telling him her true name is Noura. She explains that her former husband was physically and sexually abusive and that she lost her baby (possibly because of the abuse). The two begin a genuine relationship. As a symbol of his affection, Simon gives Noura a fox pin that his mother gave him.

Simon gives Noura the idea to buy a camera phone and begin recording herself with her married clients. They then plan to use the videos to blackmail her clients. The first person they try to extort reacts angrily and claims to be a cop. The second man named Rene, falls for the scheme and pays a huge sum of money to Noura and Simon. Noura lavishes Simon with gifts and confides to her friends that she is in love with him. She quits the brothel and stops drinking and doing drugs.

Simon comes home one day to find the first man they tried to extort has broken into the apartment and severely beaten Noura. She asks Simon to take care of her. Sensing that the relationship is coming to an end, he instead asks out Marianne (Constance Rousseau), a woman he met earlier in the film. Simon uses all the money he extorted from Rene to bring Marianne on expensive dates, ultimately sleeping with her. Simon begins leaves messages for Rene, demanding further payment.

Noura eventually confronts Simon about his infidelity and orders him to leave her home. Simon claims to love her, but she slaps him. This enrages Simon, who proceeds to brutally strangle Noura. Simon soon learns that Rene has committed suicide and Rene’s wife is investigating his cell phone. Simon flees the apartment and goes to Marianne, asking if he can stay with her (essentially, pulling the same scheme that he used to get into Noura’s life). Marianne doesn’t fall for his ruse and orders him out immediately (she also caught him in several lies earlier on). Simon goes to his family friend’s apartment to retrieve his luggage and passport.. He realizes that he left his fox pin in Noura’s apartment, which could link him to the crime.

Simon goes to the airport and buys a ticket back to the US. We hear him narrate an email to his ex-girlfriend, claiming his trip to Paris has allowed him to mature and grow into a better person. His email ends with him asking for another chance with her. A quick cutaway to Noura shows her suddenly awakening from her trauma, having survived Simon’s attempt to murder her (though it is unclear if this is simply Simon’s imagination). 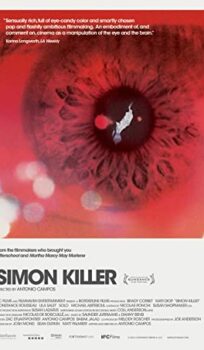