Both Willy “Casper” (Edgar Flores) and Sayra (Paulina Gaitan) make it to a river bordering between Mexico and the United States, where a coyote agrees to cross them over, one at a time, on a “balsa” (inflated rubber raft); Casper agrees to have Sayra go first.  While she is crossing, Casper is spotted by his fellow gang members and has to run off.   Unfortunately, he comes face to face with Smiley (Kristyan Ferrer), who shoots him.  The rest of the group comes behind, mercilessly finishes him off and push his body into the river.  Sayra manages to cross to the other side and resume her journey, but is heartbroken.

The movie ends with Smiley getting his lip tattooed, thus being officially embraced by the gang; Sayra’s uncle trying to cross the border once more; and Sayra having reached New Jersey, calling her father’s relatives from a payphone. 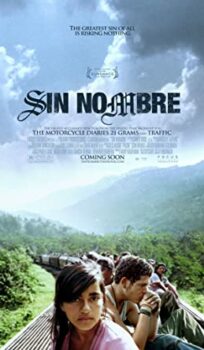