SHORT VERSION:
Section 8 defeats Section 1 for the Spring Ski Pageant’s Team Cup, thanks to John beating Reid in the final event. However, as they are celebrating, the ski school’s manager Bryce – who, along with Reid and the rest of Section 1, has never liked Section 8 – tells them that they are now going to have to contend with new management because Whistler Mountain has just been sold to the mystery buyer, who is looking to get rid of the ski resort and put high-priced housing in its place (which Bryce and Reid each stand to own a share of).

The mystery buyer turns out to be Victoria, a beautiful wealthy woman who had been inspecting the property incognito as a skier, and evidently having been impressed with Section 8’s fun-loving ways, she decides to keep the resort open and rename it Party Mountain.

At a dance party that night to celebrate the resort’s new direction, John kisses his lady love Lori, Paulette breaks up with Reid and hooks up with Fitz, and Dave gets intimate in a hot tub with Victoria.

LONG VERSION:
On the last day of the Spring Ski Pageant, the ski school’s manager, Bryce (Mark Brandon), finally has enough of the party animal antics of Section 8 in general and Dave (Dean Cameron) in particular, mainly because he feels that they threaten a deal that he is making to sell off Whistler Mountain to an unknown wealthy buyer so the buyer can put high-priced housing in place of the ski resort (with Bryce owning a share of it along with Section 1’s leader Reid [Mark Thomas Miller]), so he leaves a notice on the door of Section 8’s quarters telling them to come to his office for a disciplinary review. Dave, John (Tom Bresnahan), Fitz (Stuart Fratkin), and Ed (Patrick Labyorteaux) read the notice after returning from an all-night outing, and when they meet with Bryce, he tells them that Dave is on disciplinary suspension and all of the students enrolled in Section 8 are disqualified from competing in the finals of the Spring Ski Pageant. Soon after the guys return to their quarters to discuss this turn of events, they ultimately decide to protest Bryce’s ruling by crashing the competition and holding another one of their parties there, hoping that this will force Bryce to reinstate their section.

Just as the finals are about to begin, Section 8 shows up with babes and party supplies in tow and causes a bunch of merry mayhem, and Bryce, Reid, and the latter’s sidekick Derek (Spencer Rochfort) are less than thrilled about it. Dave, John, Fitz, and Ed soon come up to them and tell them that Section 8 has come here to ski, but Reid derides them for wanting to compete because, even if they were allowed to, their section is in last place and doesn’t stand a chance. However, after Dave gets the crowd to repeatedly chant “let them ski” in support of him and his comrades, Bryce decides to let Section 8 participate, but on the condition that they tone down their antics.

Through a combination of skiing hard and using cheating tactics against Section 1 (the latter of which they do in revenge for Section 1 knocking them down to last place yesterday through using cheating tactics themselves), Section 8 shoots right up to second place behind Section 1 and Reid. In the final event, the downhill slalom, John manages to break Reid’s course record, but he is unable to beat the stipulated time for the event, resulting in a tie for first place between Sections 1 and 8. Reid comes up to Dave and basically tells him that he isn’t accepting a tie, so they both decide to settle this with a winner-take-all challenge: Reid will face off against John in a race down the Dome (the toughest course on the mountain from which they must start at the summit), and whoever loses, their section must walk off the mountain and never look back. Though Reid has the lead for most of the race, John – despite being warned by Dave to not do this – gets ahead of him by executing a very dangerous jump off a cliff on Bald Rock and landing without trouble, and he holds his lead all the way to the finish line, giving Section 8 the victory and the Team Cup.

Afterward, Bryce tells Dave and his crew to not get too carried away with celebrating, for they now have to contend with new management; the mountain has just been sold to the buyer. The buyer turns out to be Victoria (Ava Fabian), a beautiful wealthy woman whom John had a one-night stand with and who was inspecting the property incognito as a skier, and evidently having been impressed with Section 8’s fun-loving ways, she decides to keep the resort open and rename it Party Mountain. At a big dance party that night, Dave buys Reid and Derek a drink to show that there are no hard feelings, and the antagonists have apparently come to terms with the resort’s new direction. John kisses his lady love Lori (Darlene Vogel), Paulette (Charlie Spradling) breaks up with Reid and hooks up with Fitz, and Dave gets intimate in a hot tub with Victoria. 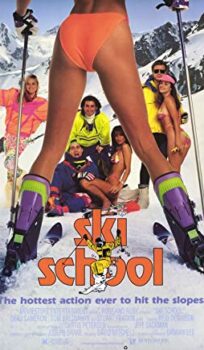