Charles Drood (Tom Hulce) is a cartoonist, who is separated from his wife (Mary Elizabeth Mastroantonio), but trying to get back with her.  His lover, Yolanda, is found murdered and the police suspect him.  Yolanda was a fake name, and she was a call girl.  He hires one of her call girl friends, to get information about her real name and why she was killed.  His wife drops in, finds him with the call girl, and storms out. Drood chases his wife down the street.  When he returns home, the call girl has been killed.  Drood is now wanted for two murders he didn’t commit.

Drood learns a mysterious client of Yolanda’s may be involved, Bobbie Nye.  Every attempt to track Bobbie fails, until Drood gets an unexpected call that Bobbie Nye wants to buy some of his paintings.  Bobbie turns out to be a very wealthy female socialite.  Bobbie was hiring Yolanda for some kinky activities.  Yolanda tried to blackmail Bobbie, so Bobbie had her goon, Buddy, kill Yolanda.  It was an unexpected bonus to Bobbie that the police suspected Drood.  Buddy was following Drood to look for other ways to implicate him.  Buddy took the initiative to kill the other call girl and make Drood look more guilty.  Bobbie figures Drood’s paintings will be very valuable after he dies as a notorious murderer.  She takes the paintings and instructs Buddy to kill Drood.  Buddy takes Drood out back.  Buddy then starts going on about how he liked Yolanda, she was nice to Buddy, and he is guilt wracked about killing her.  Buddy puts the gun in his own mouth, and kills himself instead of Drood.

Drood goes into hiding and begs his ex- wife to bring him clothes, money etc…  She shows up, but she has called the cops.  Officer Smiley (Harry Dean Stanton) believes Drood is innocent.  However, Officer John is also working for Bobbie.  John tells Smiley that he is going to shoot Drood in “self defense”, pin the murders on Drood and close the case.  Smiley refuses to go along, so John shoots Smiley.  Drood shoots John.  Drood changes clothes with John, and puts his own watch, ring, glasses on John, then lights the place on fire.  Now that she knows he is innocent, his wife goes along with him on this.  Since the police and Bobbie will think Drood is dead, no one will be looking for him.

The movie ends with Drood’s wife and daughter at “his funeral”, while Drood waits for them in the car. 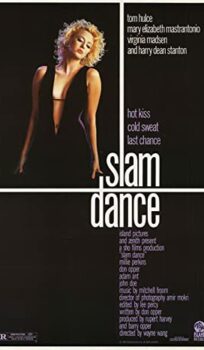