Marty (Simon Scuddamore) gets his revenge on all of the former classmates who disfigured him in a practical joke gone wrong one by one.  Carol (Caroline Munro), who was the lead in the prank, is the last to go after he corners her in the very same locker room where she had lured him all those years earlier.

But while Marty celebrates his revenge he begins to see the ghosts of everyone he has murdered popping out and trying to grab him, and when they finally catch up to him … Marty wakes up screaming in the hospital where doctors are still trying to reconstruct his face with plastic surgery.  The whole revenge scenario was a dream.

Determined to escape the hospital, Marty kills the nurse trying to sedate him and dons her uniform to trick a doctor into opening the door to his locked room.  He kills the doctor and gazes maniacally into the camera just before the screen fades to black … 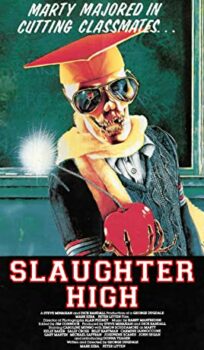