A horror movie starring the sisters of Bruce Springsteen and Emilio Estevez.

Angela (Pamela Springsteen) is released from a mental hospital following the events of the first movie and gets a job as a counselor at Camp Rolling Hills, but just can’t tolerate the way some of the campers cause trouble.  She starts out only killing the campers who misbehave and telling everyone at Camp Rolling Hills that she had to send them home.  But it all begins to unravel when Demi tells Angela that she tried to call several of the campers who were sent home and was told by their parents that they were still at camp, so Angela kills her to cover up what she has done, and kills Lea after she stumbles upon Angela disposing of Demi’s body.  The next day Uncle John (Walter Gotell) decides to fire Angela because all of the campers in her cabin are gone except for Molly (Renee Estevez).

Molly and Sean (Tony Higgins) go to the abandoned cabin to comfort Angela and end up discovering the bodies of their fellow campers — the ones whom Angela supposedly sent home.  Angela ties them up, kills T.C. when he comes to rescue them, and kills Sean after he realizes that she was the crazy camper from Camp Arawak they had heard about in the beginning of the movie.  Molly escapes and struggles with Angela — but ends up accidentally backing off of a ledge, and is left for dead.

Angela returns to Camp Rolling Hills and dispatches Uncle John and the rest of the counselors and campers that we have seen during the course of the movie, hitches a ride with a good samaritan, and ends up killing the samaritan when she makes tasteless jokes about smoking, drinking, and sex.

Meanwhile, Molly wakes up and finds her way down to the road.  She flags down an approaching car, but is shocked when — you guessed it — Angela is behind the wheel! 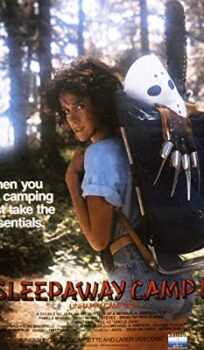