The killer who turns out to be Angela, scalds the pedophile cook, and kills many of her totmentors, including Kenny (drowned), Meg (stabbed to death in the shower), and Judy(hot curling iron in the hoo hoo).

After the camp director, who suspects her cousin Ricky is the killer severely beats Ricky, she shoots him in the neck with an arrow. Keep in mind, Angela has yet to be revealed as the killer. Afterword, Angela tells Paul, another camper who has a crush on her to meet her at the lake. Angela is then discovered wielding a knife with Pauls severed head on her lap, not only revealing that she is the killer, but also that she has, you guessed it, a penis.

In the beginning of the movie, a father, daughter, and son are at the lake, and a boating accident kills the father and one of the kids. Is assumed that Angela was the daughter, who survived, but she is actually the son, and his crazy aunt who he was sent to live with wanted him to be a girl and raised and dressed him as such. 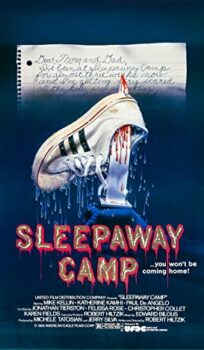