Maleficent hypnotizes Aurora and gets her to prick her finger on the spindle of a spinning wheel she forms, and Aurora is put to sleep. After finding Aurora in her state and placing her in her bed, Flora, Fauna & Merryweather decide to put the rest of the castle’s inhabitants to sleep as well so they wouldn’t know Aurora’s fate, and they will awaken when she awakens. However, Flora learns from Prince Phillip’s father King Hubert that Phillip was the man Aurora met back in the woods earlier in the day, and remembering Aurora telling them that he was coming there that night to meet her (he didn’t know who she really was at the time), and knowing that Maleficent knows of this, she and the other fairies make a beeline to the cottage to prevent any harm from coming to him. Unfortunately, by the time they arrive, Phillip had already been captured by Maleficent and her henchmen and was imprisoned in her castle. All they find is his hat. Flora tells the other fairies that they have to go to Maleficent’s castle and save him.

The fairies free Phillip, and Flora arms him with a magic sword and shield. They assist Phillip in getting out of the castle and defending him against Maleficent’s henchmen and her magic, but in a last attempt to stop him Maleficent transforms into a giant dragon and fights him. Flora, Fauna & Merryweather eventually give Phillip’s sword a magical charge, and he throws the sword into Maleficent’s chest, killing her. Phillip then goes to the bedroom where Aurora lays asleep, and, being her true love, kisses her to wake her. Everyone else in the castle wakes up as well.

Aurora & Phillip arrive in the throne room arm in arm, and Aurora reunites with her parents. They dance together to their song “Once Upon A Dream,” with Flora and Merryweather constantly changing the color of her dress between pink and blue during it (continuing an argument they had going earlier in the film). 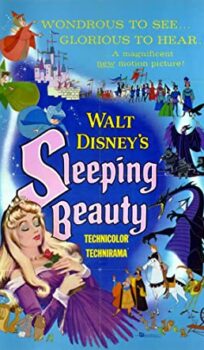