Pooper:
Although Annie breaks up with Walter and runs to the Empire State Building, she gets there just after Sam and Jonah have left. Fortunately, Jonah left his bag at the top and the duo go back up to retrieve it, thus meeting Annie (and Annie and Sam walk off hand-in-hand, suggesting the beginning of a long relationship).

Long Ending:
Our movie opens on Sam Baldwin (Tom Hanks) mourning the passing of his wife and also learning how to raise his son Jonah (Ross Malinger) on his own. Sam decides to move to Seattle to start fresh. Meanwhile, Annie Reed (Meg Ryan) accepts the proposal of her boyfriend Walter (Bill Pullman) – who is very kind and generous but also very boring.

One night, Jonah calls a nationally syndicated radio psychologist to talk about how his dad needs to find a new companion to help him with his loneliness. Sam agrees to talk on-air and spends the night describing how magical his love for his wife was and that he knew they would be married the moment he saw her. Many women are captivated by his story, including Annie, who is swept away by Sam’s passion. Over 2,000 women, including Annie, write to Sam expressing an interest in him.

Although Sam refuses to read the letters, the experience (along with the fact that young Jonah appears to have found a first girlfriend) convince him to wade back into the dating scene. He begins to date a woman named Victoria (Barbara Garrick) who Jonah hates. Jonah reads Annie’s letter (that ends with Annie offering to meet Sam at the top of the Empire State Building on Valentine’s Day since she would be in the City with Walter). Sam is not interested in meeting Annie, though Jonah writes to her on Sam’s behalf.

As Annie’s wedding draws near, she begins to panic more about the lack of passion she feels towards Walter (though she likes him and he is perfectly nice, there is no real romance). She lies to him and flies out to Seattle. Annie sees Sam and Jonah embracing Sam’s sister-in-law, whom she mistakes for Sam’s girlfriend. Though their eyes meet, Annie can only say “hi” before she leaves in embarrassment.

Sam plans a Valentine’s weekend alone with Victoria while Annie flies to New York to meet (and settle for) Walter. Jonah is very upset that Sam won’t go to New York and manages to book a flight and sneak out of the house to journey to New York alone. When Sam discovers that Jonah has run off, he immediately breaks his plans with Victoria and flies after him. Meanwhile, Annie admits her emotional affair with Sam to Walter and the two amicably agree to break off the marriage. Annie decides to go to the Empire State Building.

Sam arrives and heads straight to the Empire State Building. He finds Jonah and the two have a tearful reunion at the top, where they reaffirm their love for each other. Annie takes the last elevator of the night up to the top as Jonah and Sam simultaneously take the elevator back down. Annie is disappointed but unsurprised to find nobody at the top, especially since she came so late. Annie then catches sight of Jonah’s bag that he had accidentally left at the top.

Annie picks up the bag and turns to find Sam and Jonah standing there (they came back up to get the bag). It is clear that there is a spark between Sam and Annie. Sam extends his hand to Annie to come with them back down to the bottom and she gladly takes his hand. The three walk back to the elevators together, likely to start a long relationship as a family. The camera focuses on the heart-shaped lights adorning the side of the Empire State Building. 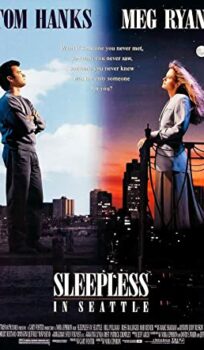