Snow White’s party stops for the night in a snowy woods. Snow White (Kristen Stewart) walks by herself until she is joined by William (Sam Claflin). He tells her she will be able to defeat Ravenna (Charlize Theron), simply by being herself, and kisses her. Snow White steps away, but he offers her an apple, which she bites into. She immediately begins to react and sees the apple become a poisonous fruit in her hand. William transforms back into Ravenna, who tries to take Snow White’s heart. But the Huntsman (Chris Hemsworth) and the real William attack her from behind; she breaks into ravens and flies back to her castle.

Snow White dies from the apple, while the dwarves watch and the Huntsman pleads with them to do something. William holds Snow White in his arms, crying and finally kisses her, but nothing happens. One of the dwarves asks what is to be done now, and the dwarf leader (Ian McShane) says they will do what they promised Snow White – join Duke Hammond (Vincent Regan) and fight Ravenna. The party is left to bring Snow White’s body back to the Duke’s castle. She is prepared for burial, and the Duke’s people mourn her.

Alone, the Huntsman drinks near Snow White’s body, and then tells her about his dead wife and apologizes for failing Snow White. He kisses her, and then leaves the room. Snow White comes back to life: crying and gasping for breath. She comes out into the courtyard of the castle, where Duke Hammond meets her. She berates him for not trying to do more to stop Ravenna, and then gives a stirring speech to people. She says she knows how to kill Ravenna now, and asks who will fight with her. Everyone in the castle kneels down, including the Huntsman. Snow White leads Hammond’s army, carrying her father’s standard, across the land towards Ravenna’s castle. The Huntsman goes with them.

Snow White’s troops attack the castle, charging across the beach. The dwarves break into the castle and raise the portcullis for the army to enter. As Snow White fights her way to the main tower, she sees Ravenna standing on the balcony above. She gets out of the big fight and charges up the stairs and into the tower. The Huntsman sees her go, and calls to William to follow.

While the Huntsman and William attack the magical soldiers in the audience room, Snow White faces off against Ravenna in the mirror room. Ravenna disarms Snow White, and holds her down on the floor. She reaches down to take out Snow White’s heart, and Snow White uses the defensive move the Huntsman taught her to slam a dagger into Ravenna’s heart. Three drops of blood fall from Ravenna’s wound, which means Ravenna’s magic has failed, and when Snow White draws out her blade, it’s coated in blood. Ravenna falls back, crawls underneath her golden mirror and rapidly ages into a very old woman as she dies.

The apple tree in the courtyard has started to bloom. In the castle, Snow White is crowned in a great ceremony, holding the branch of a tree in her hands. She looks across the crowd lining the hall and sees William, his father, and the dwarves; she seems concerned until the Huntsman steps out at the end of the hall and smiles at her. She smiles in return. 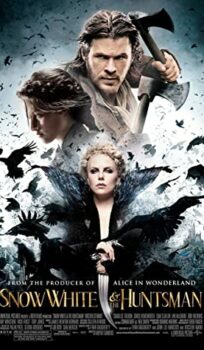