Pooper:
Solomon kills Malachi and rescues Meredith, redeeming his soul in the process. He now rules over his lands and intends to fight against the evils plaguing the world.

Long Ending:
The film opens with notorious pirate Solomon Kane (James Purefoy) leading an assault on an African castle. He shows no mercy, ordering his crew to slaughter all people they find within the castle. As he and his crew make their way to the treasure room, his crew is slaughtered by demonic beasts. Solomon cares not and continues forward until he finds the treasure. In the treasure room, Solomon is attacked by Satan’s Reaper, who says that Solomon’s soul is so evil that it now belongs to the Devil. Horrified, Solomon fights off the reaper and escapes by leaping out a window.

Several years pass and we fine that Solomon has taken refuge in a secluded monastery, having sworn an oath against future violence. He has tattooed his body with Christian symbols to keep Satan’s forces away from him. The head priest has a prophetic vision that Solomon must return home in order to find salvation. In flashbacks, we learn that Solomon is the youngest son of a powerful and wealthy lord named Josiah (Max von Sydow). Josiah selected Solomon’s brother Marcus as the heir to his throne and demanded Solomon join the priesthood. Solomon refused the offer and fled the castle in a fit of rage. While outside the walls, he comes upon Marcus assaulting a girl on a cliff-side. He intervenes and as the brothers struggle, Marcus accidentally falls off the cliff. Upset at what he has done, Solomon leaves home for good.

On his trip home, Solomon is accosted by three robbers. They beat him and take his stuff because he refuses to fight and break his oath. Solomon is found and nursed back to health by a family of Puritans including the father William (Pete Postlethwaite), his wife Katherine, elder brother Edward, younger brother Samuel, and their sister Meredith (Rachel Hurd-Wood). Solomon begins travelling and bonding with the family, eventually donning their Puritan garb. On the journey, they stumble upon a witch who recognizes Solomon. She places a mark on Meredith before Solomon chases her away.

Later, the group is located by an army of possessed soldiers lead by a masked horseman. They loot, pillage, and kill in the name of an evil sorcerer named Malachi (Jason Flemyng). Drawn to the witch’s mark, the soldiers track down the family and hold them hostage while Solomon pleads for their lives. The masked horseman shows no mercy and has his soldiers kill Samuel, Edward and William while he abducts Meredith. Solomon breaks his vow and kills all the soldiers, but too late to save anyone but Katherine. He promises Katherine and William (before he dies) that he will save Meredith. With his dying breath, William promises that rescuing Meredith will redeem Solomon’s soul.

Solomon travels from town to town searching for the masked horseman and Meredith. He encounters (and escapes from) a priest whose parishioners have been turned into zombies by Malachi. He also encounters the three robbers from earlier in the film who have now been possessed and recruited into Malachi’s army. He learns from them that Malachi sits on his father’s throne. Before he kills them, they also claim that Meredith is dead. Believing he has failed his quest, Solomon gets drunk in a tavern and is captured by the masked horseman. The horseman orders his soldier to nail Solomon to a cross and leaves him to die. At that moment, a carriage holding Meredith prisoner passes by the crucifixion site. Meredith calls out to Solomon. He hears her and finds the strength to rip himself off the cross. Solomon is then rescued by a group of rebels. They recognized Solomon from his pirate days and want him to lead their resistance.

Solomon agrees to lead the rebels in an assault on his former castle, planning to sneak them in through a hidden passage. The witch from earlier predicted Solomon would do so and the masked horseman and his forces ambush the rebels. In the melee, Solomon sneaks into the castle and goes to the dungeons where he frees all of Malachi’s captives, but does not find Meredith among them. He does find his father chained in the dungeon, cursed by Malachi to live as a prisoner forever. Josiah forgives Solomon for abandoning them. Josiah then explains that Marcus survived the fall, but fell into a coma. Desperate not to lose both his sons, he struck a deal with Malachi to restore Marcus in exchange for his throne. Malachi betrayed Josiah, turning Marcus into the masked horseman and imprisoning Josiah in the dungeons while he took the throne. With Josiah’s blessing, Solomon kills Josiah, freeing his soul from Malachi’s grasp.

Solomon makes his way to the throne-room where Malachi awaits. Malachi claims Solomon’s soul for the devil and orders the masked horseman/Marcus to kill Solomon. During the fight, Solomon apologizes to Marcus before killing him, thus freeing Marcus’ soul as well. Malachi uses Meredith’s blood to open a portal to Hell and summons a Balrog to kill Solomon. It is clear Solomon is no match, but he manages to shoot Malachi in the head and uses Malachi’s blood to close the portal and seal the Balrog back in Hell. In so doing, Solomon saves Meredith and redeems his soul.

The film ends with Solomon sitting on his father’s throne and his father and brother being given a proper burial. Solomon vows that he will dedicate his life henceforth to seeking out and destroying evil wherever he can. 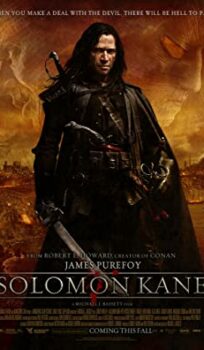