A couple of decades after Bride, Dr. Frankenstein’s son Wolf (Basil Rathbone) and family come from America to inherit the old Frankenstein estate.

Climax comes when Wolf has to shoot squirrely Ygor to death, sending the Monster on a rampage. The Monster kidnaps Wolf’s annoying young son. To save the kid, Wolf swashbuckles down a rope and kicks the Monster into a heretofore unseen pit of boiling volcanic sulfur. 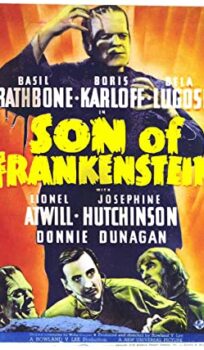