Submitted by Curt and WV

Sophie’s choice refers not to which of the two men she loves more but to the choice she had to make when being processed into a death camp. She had two little children and had to choose between them.

Sophie (Meryl Streep) chooses the boy, but he dies anyway. In the end it turns out that Nathan (Kevin Kline) is schizophrenic and not a scientist at all; he and Sophie commit suicide. 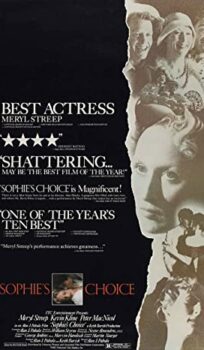