Cassius “Cash” Green (Lakeith Stanfield) is broke and hoping to make things better for himself and his girlfriend Detroit (Tessa Thompson). He finds himself a job at as a telemarketer for a company called RegalView, and he earns a lot of money by using a “white voice” to secure clients.

RegalView’s top client, WorryFree, is criticized for using slave labor with their employees to cut back costs, and a protest group called Left Eye frequently rallies against them. As Cash makes more money, he abandons his friends who protested, which causes him and Detroit to break up. He becomes a Power Caller and is able to rub shoulders with WorryFree’s CEO Steve Lift (Armie Hammer).

Cash soon discovers that WorryFree indeed uses their employees as slaves, but the twist is that they use a cocaine-like serum to transform their workers into half-human/half-horse creatures called Equestrisapiens. Cash attempts to expose WorryFree with a video recorded on his phone, but it backfires and only makes the company more profitable. He returns to join the protesters but is almost arrested by police until the Equestrisapiens escape and take the police down.

Cash gets back with Detroit, but because he snorted the coke at Steve’s house, he starts to transform into an Equestrisapien himself. Once fully transformed, he leads the others to break into Steve’s house to get him. 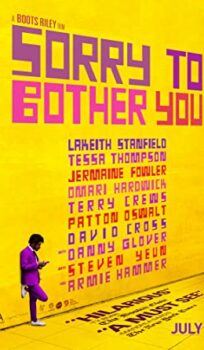