The movie opens with Leona Stevenson (Barbara Stanwyck) in bed, repeatedly calling her husband at work, with no answer. Leona is an invalid, and is scared to be alone at night after her servant has left. In one of her calls, the lines cross and she can hear two men. (Note to younger readers, yes, that used to happen a lot back then where you could hear a random call, but they could not hear you). One man is giving the other instructions for murdering a lady, noting that it must be exactly at 11:15PM, when the train passes, so no one will hear her scream.

Leona calls the police, but they do not pay attention to her.

Through flashbacks, we learn that Leona is the only daughter of a very wealthy man. She married Henry Stevenson (Burt Lancaster), a poor man who now works for her father. Leona uses her father’s money and power to control her husband. Both Leona and her father treat him very badly.

Leona desperately begins to call people trying to locate her husband. Through the conversations, she learns gradually that her husband was stealing from her father’s company. He was selling the stolen material through a mob boss, Morano. Henry tried to cheat the mob, and now owes them a lot of money. Morano told Henry that the mob will kill Leona, so that Henry inherits the money to pay them back. The police know of the thefts (but not the murder plot), and are out to arrest Henry and his accomplices.

Leona also speaks to her doctor who reveals to her that her illness is all in her head. Leona had been a very spoiled child who got anything she wanted with a tantrum. This has carried over into adulthood, where she has “attacks” whenever she does not get her way.

Henry has a change of heart and calls Leona. He confirms her fear that a hitman is coming to kill her in a few minutes. He tells her that she is physically fine as the doctor said, and begs her to go to the window and scream for help before the train comes. She is so convinced she is ill that she can not do it. The call is disconnected. When Henry calls back, the hit man answers the phone and says “Sorry, wrong number”. We see the police waiting to arrest him as he exits the phone booth. 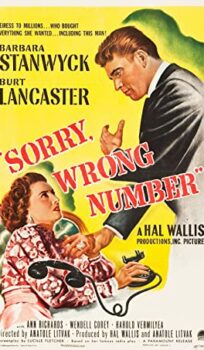