The movie is shown as live events happening on a network news broadcast.

POOPER
The nuclear weapon goes off while it is being defused, destroying the entire city of Charleston, South Carolina. Nearly everyone in the city not killed by the blast are badly burned or exposed to lethal amounts of radiation. Three days later, the network has moved on to other news stories.

LONG VERSION
Regular programming on television network RBS is interrupted by a special news bulletin. In New York, RBS news anchors Susan Myles (Kathryn Walker) and John Woodley (Ed Flanders) are reporting that terrorists have taken four hostages aboard a tugboat anchored at the Port of Charleston in South Carolina. Two of the hostages are WPIV (the RBS affiliate in Charleston) reporter Steven Levitt (Christopher Allport) and cameraman George Takashima (Robert Kay), who were at the dock covering another story. The other two hostages are members of the Coast Guard who surrendered following a shootout with the terrorists. Steven and George were broadcasting live to tape, and it was being recorded back at their station, when they were taken hostage. After that video is shown, RBS reporter Meg Barclay (Roxanne Hart) is now at the dock continuing the story. She reports that Steven was able to talk to his station, and he tells them that the terrorists are wanting their demands to be broadcast over the air, or they will start killing the hostages. After the network and the FBI talk it over, RBS agrees to air the terrorist demands. Now broadcasting from the tugboat, the terrorists introduce themselves. They are led by Dr. Bruce Lyman (David Clennon) and Dr. David McKeeson (David Rasche), and they are joined by Frieda Barton (Rosalind Cash), Jim Seaver (Ebbe Roe Smith), and Diane Silverman (Roberta Maxwell). As a sign of good faith, they release the two Coast Guardsmen, but say they need to hold on to Steven and George as a way to continue to communicate with RBS, and promise not to harm either of them as long as the video feed is not cut. They would know if it was because they have a television on board tuned to WPIV.

Dr. Lyman, a former employee of the Pentagon, is demanding that the detonators for every nuclear weapon in the Charleston area (a total of 968 of them) be delivered to the tugboat by 4:30pm the next day, where they will then take them out to the ocean and destroy them. These nukes are either on ships, submarines, or bombers based in Charleston. Their hope is that this will lead to the eventual disarmament of every nuke in the world. If they do not receive the detonators, or their path out to the ocean is blocked, they will detonate their own nuclear weapon that is on the tugboat at 6:00pm. After the broadcast, both the news anchors and the government are skeptical that the terrorists have a real nuke with them. As a result, Dr. McKeeson comes on the air and shows everyone the nuke. He says that the nuke contains five kilograms of stolen plutonium, and he installed anti-tampering devices to prevent anyone other than himself from disarming it. Still not believing them, RBS begins to report on what they know about Dr. Lyman and the other terrorists as well as the Coast Guardsmen wounded earlier. They then report that one of the wounded Coast Guardsmen has died, and all five terrorists are now facing murder charges. On the tugboat, the terrorists are all shocked by the death, as that was not part of their plan. RBS then reports that five kilograms of plutonium were reported missing from a nuclear facility that Dr. McKeeson used to work at, and the government knew about it for months. The White House then issues a statement saying that even though they don’t believe the threat in Charleston is real, the President has ordered an evacuation of the city anyway. Upon hearing this, the anchors begin to speculate that the nuke might be real after all, and predict the evacuation of Charleston will not go well.

The story picks up hours later. The government has now confirmed the nuke is indeed real, and as expected, the evacuation of Charleston has been chaotic. The city was not prepared for a mass evacuation with short notice, and all the roads leading out of the city are jammed. Hastily prepared evacuation centers are already overflowing, and looting and violence has occurred throughout the city, leading to fatalities. RBS has also begun showing what the effects of a nuclear detonation would do to the city, and they have been interviewing survivors of Hiroshima and Nagasaki to let everyone know what the people in Charleston would expect. RBS is also reporting that other anti-nuclear activists are angry with Dr. Lyman’s group, claiming that their actions are painting all of them as terrorists and the anti-nuclear movement will be damaged as a result. Some are also complaining about the media’s coverage of the event, even claiming that RBS is sensationalizing it to bolster their ratings, a sentiment echoed by Dr. McKeeson.

The next morning, the situation aboard the tugboat begins to deteriorate. Jim begins shooting at a news helicopter flying near the boat, then goes on a rambling diatribe. Later, Diane calls her husband and it sounds like she is ready to surrender, but she decides not to. Meanwhile in Washington, the US Senate is coming up with a plan to appease the terrorists, and the President has said he will not order an armed strike against them, fearing they would immediately set off the nuke. Back on the boat, Dr. Lyman and Dr. McKeeson are arguing when they learn from John and Susan that the government is considering giving in to their demands. Dr. Lyman is happy to hear that, but Dr. McKeeson doesn’t believe it and is considering setting off the nuke right now, which understandably concerns the anchors. Hours later, with the 4:30 deadline approaching, the Charleston police and the FBI has ordered all of the demonstrators at the dock, as well as all of the media, to leave. Meg Barclay has moved to the USS Yorktown museum two miles away, which she says is as far away as they can be and still cover the story. Suddenly, two different RBS reports come in at the same time. One reporter is saying the government is officially going to accede to the terrorists’ demands, while another one says there has been no signs that the government is doing that. Just as the deadline passes, the White House announces that the detonators will be turned over to the terrorists, with the first batch coming soon. As a pair of trucks pulls up to the tugboat, the group on board begin to celebrate as they now believe they have won. Suddenly, the feed on the tugboat cuts out. While watching on an unmanned camera, Meg reports that troops are boarding the ship and shots ring out. A shootout begins between the troops and the terrorists. Dr. Lyman, Jim, and Diane are killed, and when the troops approach Dr. McKeeson, he shoots himself in the head. The police take Frieda, the only survivor, into custody, and Steven and George are rescued.

As word spreads that the terrorists have been neutralized and the bomb didn’t go off, the people of Charleston begin to celebrate, and the people at RBS start to breathe easier. Steven and George, now off of the tugboat, begin to report that the team from NEST (Nuclear Emergency Search Team) has arrived to disarm the nuclear weapon. NEST sets up a camera to record the disarming of the bomb and get to work. As the 6:00 deadline approaches, the team is struggling to disarm the bomb. Steven is still reporting from the dock, and John, seeing from the NEST camera that the team is having trouble, implores him and George to leave the area, but they refuse. Suddenly, the NEST team is in a panic because they just triggered an anti-tamper device and start to quickly leave the ship. Then there is a bright light, and the signal from the dock begins to show static. Back in New York, John and Susan are demanding to know what happened, but they fear the worst. They then go to Meg Barclay on the Yorktown, but all the camera shows is the entire dock is on fire and that the carrier is in ruins. Meg is near hysterics when she says that her cameraman is alive but her producer was killed, and asks how soon until the radiation will affect them. After Meg says that the camera was turned on when the bomb went off, Susan, in tears, asks that the tape be played back. Meg is horrified by the request, but she gets her cameraman to rewind the tape in the camera and he plays it. It shows the white light from the tugboat, then a mushroom cloud. Seconds later, the shockwave hits the Yorktown, destroying it and exposing Meg and the cameraman to lethal amounts of radiation. In New York, John and Susan, both in tears, throw to other reporters in Charleston, and they report that the entire city is in flames, and hundreds of people are arriving at the hospitals badly burned. Unable to continue on, John throws it to commercial break.

Three days later, on their nightly newscast, Susan reports on the aftermath of the explosion. Due to the earlier evacuation, the death toll is expected to be less than 2000, but over 25,000 are injured, mostly from burns. The fallout is spreading over land, so another 500,000 people have been evacuated as well, and that number could rise. Scientists also estimate it will be many years before Charleston is habitable again. The movie ends with Susan moving on to other news stories. 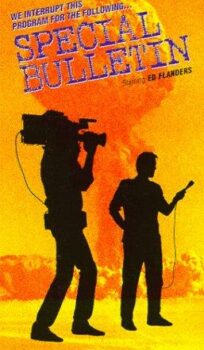