On a European trip with his high school class, Peter Parker (Tom Holland) is recruited by Nick Fury to fight a new threat known as Elementals, giant monsters based on the four basic elements: air, water, earth, and fire. He also meets Quentin Beck (Jake Gyllenhaal), who goes by the superhero name Mysterio. Beck says the Elementals destroyed his Earth in an alternate dimension and they will do the same to this Earth.

Parker and Mysterio team up to defeat the fourth and final Fire Elemental in Prague. Later, while celebrating at a bar, Parker says he wants to live a normal life and hands over Edith, a special pair of sunglasses that controls Stark weapons and technology, to Beck. Once Parker leaves, Mysterio reveals that he is actually a former Stark Industries employee who has been using advanced illusion technology to create the Elementals and the Mysterio persona.

Beck uses Edith and his illusion technology to create a huge monster in London, while also trying to kill Peter, MJ, and Ned. Peter defeats Beck, saves his friends, and confesses his feelings for MJ, who says she likes him, too.

Mid-credits scene: Peter takes MJ on a web-slinging date through New York. Then a news report shows a final message from Mysterio that blames Spider-Man for the attack and also reveals his secret identity of Peter Parker.

Post-credits scene: Nick Fury and Maria Hill are revealed to be Talos and another Skrull, who were in disguise for the entire movie. Talos calls the real Nick Fury, who has been vacationing on a space station with the rest of the Skrulls. 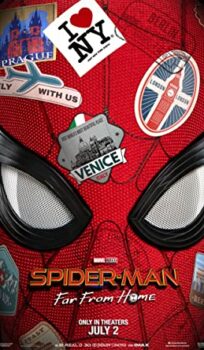