A new editor at the Boston Globe assigns the investigative team, Spotlight, to dig deeper into a story about a priest arrested for molesting dozens of young boys.  While researching, they learn that this isn’t an isolated incident but there are as many as 90 priests caught molesting kids in Boston alone.

They investigate further and learn that the Catholic Church has covered up scandals by always resolving complains under the table so they go undetected and unreported.  By gaining access to sealed documents, the Spotlight team acquires evidence that the church knew about the molestations for decades but were in the habit of covering up all secrets tied to their clergy, to keep their image clean.

Despite friends of the church threatening the journalists, they are able to secure enough evidence to run the story, which leads to a long investigation exposing the cover-up that we now know extended beyond the country and all over the world. 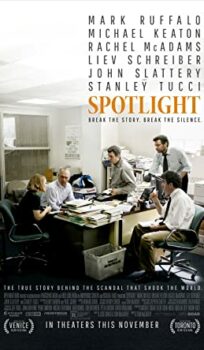