As Nelson (David Knell) is getting the attention of his love interest Susie (Jayne Modean) at a bikini contest she is participating in, he gets spotted by Eddie (Richard B. Shull), who was ordered by Nelson’s stepfather Dalby (Donald Symington) to find him in exchange for being given $5,000 to use to bribe the safety inspector Ames (Fred Buch) into shutting down Geri’s (Jessica James) motel, where Nelson and his friends Adam (Perry Lang), Stu (Paul Land), and O.T. (Steve Bassett) are staying. As Nelson tells Susie about a party going on that night at the motel, Eddie overhears this and reports everything back to Dalby, then takes Dalby’s two henchmen Thomas and Lloyd with him to the motel to capture Nelson.

When they arrive at the party, Nelson sees them before they see him first, and with the aid of his friends, Geri, and the bellhop Eesh (Daniel Faraldo), he escapes with Susie in O.T.’s car and his friends sabotage Eddie’s car so he can’t follow them. Nelson and Susie spend the night at a beach and have sex, but unfortunately, Eddie and the goons catch up to them the next morning and take Nelson to Dalby’s yacht, and Eddie gets his bribe money. Dalby lambastes Nelson for his hedonistic behavior, and he reveals that he is the mastermind behind Eddie’s scheme to close down the motel (though his reasons for doing so are never disclosed), and then he has his men lock up Nelson in a room when he tries to leave. Susie returns to the motel and tells Nelson’s friends about what has befallen him, and then they all see Eddie show up with Ames. Ames informs Geri that her motel is being shut down for violating its safety code, and Eddie says that all of the guests must vacate the premises by sunset. After the bad guys leave, Adam, Stu, and O.T. tell Geri that this isn’t over and start to cook up a plan to set things right.

That night, the trio creep up to Dalby’s yacht, and O.T. sneaks aboard to find and free Nelson while Adam and Stu hold themselves in reserve. O.T. accomplishes his task, but he and Nelson make noise and soon find themselves fighting Thomas, Lloyd, and two deckhands, but they get an assist from Adam and Stu and they all manage to take off in Stu’s car back to the motel. Eddie, Ames, Thomas, Lloyd, and the deckhands give chase, followed by Dalby and his wife/Nelson’s mother May (Mimi Cozzens). Eddie and his crew get to the seemingly vacant motel and look around for the quartet, but they soon find themselves confronted in the pool area by the guys, Susie, O.T.’s new lady love Joan (Corinne Alphen), Geri, Eesh, and a cavalry of spring breakers, and they beat up and embarrass the antagonists before tying them up.

Dalby and May then show up, but when Dalby demands that his entourage be released lest all of the spring breakers be arrested, Nelson stands up to him and tells him that he is not going to back down from him anymore nor take any further verbal abuse from him. Nelson then forces Ames to confess that Eddie had given him a cash bribe to shut the motel down, and Eddie had gotten that cash from Dalby. Nelson warns his stepfather that, if he does call the police on them, then he and all of the spring breakers will tell them about how he bribed a safety inspector, which will harm his burgeoning senatorial campaign, and he then uses this threat to blackmail Dalby into letting the motel remain open with Geri as owner. Having now seen how slimy Dalby truly is, May tells him that she is taking back every cent she put into his campaign and is also ending their marriage. He storms off intending to make a planned political dinner that night, but he gets sprayed with some beer on the way out. While he is driving away, he gets pulled over by the cops, and because he reeks of beer, he gets arrested on a D.U.I. charge.

The next morning, the guys make ready to return to their colleges, and Joan kisses O.T. goodbye while Susie does the same with Nelson. Geri then gets a snapshot of the group. 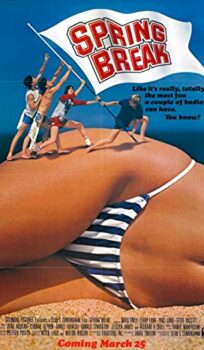