Pooper:
Stalker has a nervous breakdown when neither the Writer nor the Professor enter the room. The film ends with Stalker being comforted by his family and his daughter displaying telekinetic powers.

Long Ending:
A few years ago, strange occurrences began happening in a Russian city. People and animals began disappearing and a legend emerged that a room in the City could grant an occupant’s deepest desires. The repressive government regime cleared everyone out and cordoned off the area, named “the Zone.” The government has forbidden anyone from accessing the Zone. Though legend states the Zone was created by a meteor impact, it is implied that the Zone was created by a nuclear reactor meltdown.

Individuals hire guides named stalkers to take them into the Zone and access the room. The movie follows one such Stalker (Aleksandr Kaydanovskiy). His wife (Alisa Freyndlikh) tries to dissuade him from his job as he will be arrested if caught. The pair also have a daughter suffering from various maladies and referred to by the public as a “Zone Mutant.” However, Stalker cannot stay away from the Zone. He meets his clients, a Writer (Anatoliy Solonitsyn) and Professor (Nikolay Grinko). The three successfully make it into the Zone (where the picture morphs from sepia-tone to color).

Stalker explains that the Zone is alive and constantly changing. It sets up traps that visitors must survive to reach the room. The three take a  circuitous route through the Zone, engaging in various philosophical discussions and self examinations. We also learn that Stalker’s mentor, a man named Porcupine, killed himself after entering the room on one trip. Porcupine’s brother had also died earlier while traveling through the Zone.

The trio eventually reach the room and get into an argument when neither the Writer nor the Professor agree to enter. The Writer states that the room grants an occupant’s deepest desires, and that human desire is always motivated by greed and selfishness.  Writer theorizes that Porcupine killed himself because he intended to ask the room to resurrect his dead brother. But instead, the room recognized Porcupine’s true desire was money and gave Porcupine money instead (and thus, Porcupine killed himself upon realizing how base his desires were). Not wanting his basest desires to manifest, the Writer refuses to enter. The Professor reveals he brought a bomb with the intent of blowing up the room (fearing that demagogues would eventually make their way there and use the room to enslave the world). Although the Professor is talked out of detonating the bomb, they get Stalker to admit that nobody he has brought to the room has left happy or satisfied.

We learn that Stalker goes into the Zone because it is a reprieve from the misery and harshness of life under the government regime. He is disappointed because the Room represents hope and miracles, but nobody he takes to the Zone will enter it or find happiness therein if they do.  Stalker suffers a nervous breakdown after the Writer and Professor refuse to enter. The three are then shown to have returned home.

Stalker’s wife nurses Stalker back to health and says she would go to the Zone with him. Stalker objects because he is afraid his wife, too, will fail to find happiness in the room. Stalker’s wife explains that she married him knowing that their child would likely be deformed and realizing he would always risk jail because she didn’t want a plain and safe life. Without pain, his wife explains, a person cannot realize and appreciate pleasure and happiness.

We then focus on Stalker’s daughter, who sees the world in color. The last scene is of Stalker’s daughter demonstrating telepathic powers (i.e., miraculous powers, showing that while she is viewed as a mutant by humanity, she actually has powers beyond humanity). 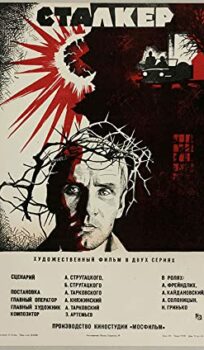