After a battle with the Broodwarrior, Spencer (Joseph Mazzello) asks Cy what will happen if the Broodwarrior gets him. Cy explains that he will be taken back to its homeworld and reverse engineered so its kind could gain some technological knowledge to use against the Trelkins, who created him. Also, he warns Spencer that if the Broodwarriors beat the Trelkins, they will eventually invade Earth. He asks for Spencer’s help in stopping the Broodwarrior from acquiring him, but Spencer fearfully says he wants no part of it, and abandons him. However, some time after he arrives home, he has a change of heart and heads back after Cy. Along the way, he encounters Turbo (Joey Simmrin), and he finally stands up to him, flooring him with a punch. Then, the two spot one of the Broodwarrior’s spies, and Spencer convinces Turbo to help him save Cy.

They go to the location where Spencer left Cy, but find him gone. Spencer deduces that the Broodwarrior took Cy back to the junkyard, where Cy first landed, so he could cover Cy’s tracks before he left. When they get there, Turbo distracts the Broodwarrior long enough for Spencer to get into Cy, and they then save Turbo from being killed and fight the Broodwarrior. Cy ends up sustaining severe damage, so he ejects Spencer out of him before all of his power is lost, leaving Spencer and Turbo to fight the Broodwarrior alone. They eventually trap it inside of a crusher and turn the power on, destroying it.

Spencer and Turbo go tend to Cy, but find him apparently dead. Then, a group of Trelkins – led by Cy’s creator – show up, and they repair and restore Cy back to life. Knowing Cy has to go back to his homeworld now, Spencer bids him a tearful goodbye. Before the Trelkins leave, one of them gives Spencer a medal, to commend him for stopping the Broodwarrior.

Spencer goes to school the next day and sees the girl that he likes, and with his newfound confidence – and a bit of encouragement from Turbo, who is now his friend – he finally goes up and talks to her, and they hit it off. 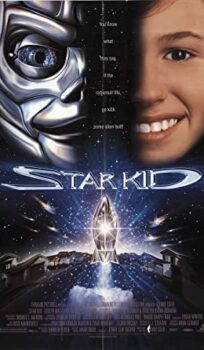