With the help of C-3PO (voice of Anthony Daniels) and the timely arrival of some Clone Troopers, she breaks out of Ziro’s custody and via hologram, forces Ziro to confess his involvement in the kidnapping.

Along the way, Obi-Wan battle Ventress who is Count Dooku’s new Sith apprentice, R2-D2 saves the day several times, Anakin acts like a jerk to Ahsoka and Chancellor Palpatine is seen pulling the strings behind the scenes. 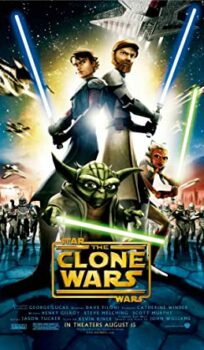