SHORT VERSION:
In the final showdown with Zygon in the mines on Trinia, Orin loses the hilt that he believes he needs to create the invisible blade and finds himself hanging on the edge of a chasm with a river of lava lying below. Just as it looks like victory is near for Zygon, the Starfly appears before Orin, and Orin begs it to bring him the hilt. The Starfly replies that he doesn’t need it, for there never was a blade, meaning that the cutting force he had been using this whole time came from within himself. He gets back on solid ground and creates an energy blade by channeling his energies into his hands, and with it he cuts Zygon in two and sends his halves into the lava. Orin’s fellow miners then rebel against their robot slave drivers and destroy them, too, and as this happens, Dagg and Silica destroy Zygon’s fortress (though purely by accident).

Orin leads Aviana and the miners up to the surface, and there, he uses his new powers to heal his younger brother Calli of his blindness just as Dagg and Silica show up to join in on the victory celebration. Six Starflies then emerge and transform into the spirits of the past Ka-Khan warriors, and the elder Ka-Khan tells Orin that he is free to join them among the stars. Orin declines for the time being, wanting to live out his mortal life first so he can be with Aviana. The Ka-Khan accept his decision and then join a constellation in the starlit sky shaped like the hilt.

LONG VERSION:
While Orin, Dagg, and Silica are flying in the Starchaser on Bordogon preparing to depart to find the blade for Orin’s special sword hilt on Nova Luna (where he was told the blade was located by a spurious fortune teller), a group of Zygon’s forces who are searching for them start shooting at them. Despite destroying a few of the enemy ships, the Starchaser gets shot down, and all are knocked unconscious from the crash. Orin is thrown from the ship and gets stuck in a tree while Zygon’s robots take Dagg and bring him to Zygon’s fortress on Trinia for questioning. Orin is saved by Aviana – daughter of the Bordogon system’s supreme governor whom he had earlier briefly met – and her robot servant Meezo and brought to her palace.

Orin wakes up as Aviana is tending to him, and he tells her his backstory, but she expresses disbelief at humans mining the crystals on Trinia, saying that her father would’ve never allowed such a thing. After she looks at the hilt, she remembers something from her history lessons regarding it, so she has her computer scan it. The computer tells her and Orin that the hilt is associated with the Ka-Khan, a line of heroic warriors who possessed bladeless swords and eliminated threats to galactic peace. The last Ka-Khan warrior existed 600 years ago, when he defeated a would-be tyrant named Nexus on Trinia, and the blade was presumed lost after the final battle. Orin and Aviana immediately head to Trinia with Meezo to find the blade, and also to get hard evidence for her father of humans working in the mines.

However, shortly after arriving, Zygon and a group of his soldiers catch them, and Orin gets into a brief fight with Zygon, during which he uses the invisible blade to slash his face and expose him as a robot. Zygon also reveals himself to be Nexus, and has been spending the last 1200 years building up his power, and he has now acquired enough to subjugate all organic life. Meezo then tries to help Orin and gets destroyed, and Zygon takes the hilt and has Orin and Aviana imprisoned in a cell next to Dagg, Zygon then makes plans to attack the Bordogon system, since he knows that Aviana’s father will notice that she is missing and will track her here and could mount a counter-offensive if he discovers what he is doing. He later orders for Aviana to be brought onto his flagship as a hostage, but before she is taken away from their cell, she tells Orin that she has fallen for him.

A Starfly soon appears in Orin’s cell, and Orin begs it to bring him the hilt. The Starfly tells him that he doesn’t really need it, but sneaks it to him anyway. Orin uses the invisible blade to free himself and Dagg, and together they go after Aviana. They find her being taken aboard the flagship and sneak onto it, and they jettison its ground forces and wipe out the cockpit’s crew as they save her. They then destroy one of the leading warships, and that combined with him noticing that the hilt is missing makes Zygon realize that Orin is aboard the flagship, so he orders his ships to destroy it. The heroes are chased by the enemy ships into Bordogon, but thankfully, Silica and Arthur – having restored the Starchaser to working order – come flying in and destroy the pursuers. With the aid of the Starfly, Dagg then accesses the main targeting computer of Zygon’s fleet and blows the warheads they are all carrying, destroying them all and sparing Bordogon from annihilation.

The heroes then head back to Trinia to both find the blade and confront Zygon, but their attempt to sneak into his fortress fails fast and they find themselves fighting more of Zygon’s ships. The enemy ships unleash a series of kamikaze attacks on the flagship and make it crash, but Orin, Dagg, and Aviana get out of the wreckage unharmed save for a broken leg that Dagg sustains. After Silica and Arthur land to check on them, Orin tells them all that he is going into the mines alone to free his people. Zygon spots Orin entering the mines and follows him, and Aviana sees Zygon and gives chase herself just as Silica gets Dagg back aboard the Starchaser.

Orin speaks to his people from the main entrance across from a chasm separating them and tells them that there is another world beyond this one, but Zygon then appears. As Orin uses his invisible blade to floor Zygon, Aviana emerges, but Zygon quickly seizes her and makes Orin hand over the hilt in exchange for her safety. He throws down Aviana and tries without success to use the invisible blade on Orin, so he discards the hilt and attempts to throw Orin down into the chasm, where a river of lava lies below. Orin grabs the ledge, and the Starfly then appears before him. He begs it to bring him the hilt again, but it tells him that he doesn’t need the hilt, for there never was a blade. Orin realizes that the cutting force he has been using came from within himself.

He soon manages to get back on solid ground and then concentrates and channels energy into his hands to create an energy blade. He slices off Zygon’s hand when he tries to shoot him, and then forces the shocked and horrified tyrant over to the chasm where he cuts him in half at the waist, and Zygon’s parts fall into the lava. The miners then rebel against their robot slave drivers and send them down into the lava as well. Meanwhile, Dagg, Silica, and Arthur continue battling more enemy ships while trying to make an escape, and Silica ends up shooting one down that lands right into a river of the mined crystals, which are highly combustible. The subsequent explosion obliterates the fortress, but the trio manage to get out in the nick of time. The explosions also cause the mines to start collapsing, so Orin uses his new powers to create a safe entrance to the surface for everyone there.

After they all get topside, Orin uses his powers to heal his younger brother Calli of his blindness, and Dagg and Silica arrive to join in on the victory celebration. Six Starflies then appear and transform into the spirits of the past Ka-Khan warriors. The elder Ka-Khan tells Orin that he has earned his place with them amongst the stars, but Orin declines for the time being, saying that he wants to live out his mortal life first (to be with Aviana). The Ka-Khan accept his decision gracefully and then ascend into the starlit sky, joining a constellation shaped like the hilt. 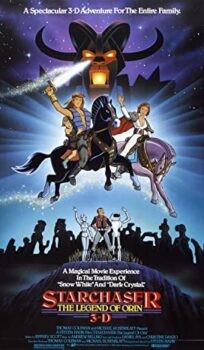