When the Air Force shoots down a UFO, it crashes in Chequamegon Bay, Wisconsin. An incorporeal alien emerges and takes the form of Scott Hayden (Jeff Bridges) by using a lock of hair saved by his grieving wife Jenny (Karen Allen). Jenny is terrified, but the alien only requests to be driven to the Winslow, Arizona meteor crater in three days to be retrieved or he will die.

During the trip, Jenny tries to escape from Starman several times. When she sees Starman resurrect a dead deer that had been killed by a hunter, she changes her opinion of Starman and helps him willingly. They are pursued by George Fox (Richard Jaeckel) of National Security who wants to capture and study the alien as well as by Mark Shermin (Charles Martin Smith), a SETI scientist who just wants to talk to Starman. Shermin believes that the gold anodized disk sent on one of the Voyager probes has led Starman to Earth after they find a disk inside Starman’s recovered spacecraft.

While fleeing a police blockade on I-70, Jenny is shot and killed. Starman crashes a roadblock and the car explodes in flames. Using one of his alien pearls, Starman escapes the flames with Jenny’s body and then uses another pearl to resurrect her. They escape a rainstorm by hiding in an empty train car and subsequently make love. Although Jenny is sterile, Starman tells her that she is pregnant.

Jenny and Starman wind up in Vegas where Starman uses his powers to win a jackpot and they buy a new car to travel to WInslow. While the pair eat at a diner, the diner is surrounded by cops who call in Shermin. Starman tells Shermin that the aliens have visited Earth before and find humans fascinating among the many species in the universe. Jenny appeals to Shermin to let them go. Shermin agrees and blows cigar smoke in Fox’s face after Fox arrives at the empty diner.

Starman and Jenny run down into the crater, pursued by police and Army helicopters. A huge windstorm billows up grounding everything and a giant spherical craft that is the size of the crater appears. Jenny and Starman share a tearful goodbye. Starman gives Jenny one of the alien pearls, since he baby will know how to use it and will be a teacher for mankind. The ship leaves as Jenny stares after it. 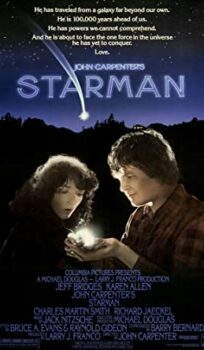