SHORT VERSION:
At the National Championships, Haley gets irritated over how the judges deduct points from the gymnasts for unimportant minor errors. In the vault event, after her stablemate Mina completes her routine and gets a deduction simply because her bra strap was showing, she decides that enough is enough and proceeds to deliberately show off her own bra strap and then scratches (forfeits her turn). The other gymnasts decide to follow suit, leaving Mina the gold medal winner of that event by default.

They then convince the other gymnasts there to take this approach in every event – selecting someone to win while everyone else scratches – so they will get to control the results for a change, and everyone goes along with it except for Tricia Skilken, who is keen on competing. Haley eventually explains to her what they are trying to do, and during the floor event, after Haley – who has been handpicked to win the event – completes her routine, Tricia shows that she has gotten the message by showing off her bra strap and scratching.

After the meet, Coach Vickerman shows Haley that numerous colleges have offered her athletics scholarships to compete for them in NCAA gymnastics.

LONG VERSION:
At the Invitational Gymnastics Classic, Haley (Missy Peregrym) finds out from her mother that Coach Vickerman (Jeff Bridges) has been receiving four times the standard fee from her father so he will put up with her. Now distraught because she believed that he had come to respect her, she walks out on the competition before it’s over, like how she did during the finals of the World Gymnastics Championships (or “Worlds” for short).

Vickerman stops her as she is leaving the arena and tries to get her to finish the meet, but she confronts him with the knowledge that she has, and Vickerman tells her that maybe she should go back to her old coach DeFrank (John Kapelos). Haley refuses, and reveals to him that the reason why she walked out on the finals at Worlds was because, just before the event, she found out that her mother was having an affair with DeFrank and she and her father were divorcing as a result. Vickerman offers his sympathy, but Haley pushes him away and leaves in tears. Some time later, Haley is called in to see Judge Westreich (Polly Holliday), and the judge tells her that Vickerman had appealed to the court to give her a clean slate, and she has been given one, and he also squared away her property damage debts with the extra money he was getting. She returns to his gym, thanks him, and takes him back as her coach.

She ends up qualifying for the National Championships, along with Joanne (Vanessa Lengies), Wei Wei (Nikki SooHoo), and Mina (Maddy Curley). At the event, Haley gets irritated over how the judges deduct points from the gymnasts for unimportant minor errors (which was one of the things that made her shun gymnastics), and the irritation worsens as time goes on. The final straw comes during the vault event, when Mina completes her routine and gets a deduction simply because her bra strap was showing. When Haley takes her turn, she deliberately shows off her bra strap and then scratches (forfeits her turn). This act of rebellion inspires her stablemates to scratch as well, leaving Mina as the gold medalist of that event by default.

Spurred on by a suggestion from Joanne, Haley and company decide to convince all of the other gymnasts to choose one person to win each event while everyone else scratches so that way they will get to control the results for a change. They all agree to play along, except for the judges’ favorite (and Haley’s former teammate at Worlds), Tricia Skilken (Tara Paige), who is keen on competing, and she defeats Wei Wei in the balance beam event that Wei Wei had been handpicked to win. Haley later explains to Tricia that what they are doing is strictly about protesting the judges’ manner of scoring.

When the floor event rolls around, everyone scratches until Haley and Tricia are the only ones left. Before Haley begins her routine, Vickerman tells her that he is proud to be her coach and urges her to go all out. Haley puts on a superb performance, and when Tricia prepares to take her turn, she reveals her bra strap and scratches, having finally understood the message. Haley wins the gold medal in that event, and Tricia awards Wei Wei her gold medal.

Recognized for her talents again, Haley finds out from Vickerman that numerous colleges are offering her athletics scholarships to compete for them in NCAA gymnastics. 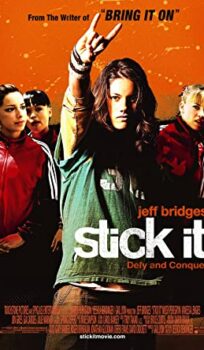