Pooper:
Ice Cube, Dr. Dre and Eazy-E mend their relationships with each other and agree to re-form N.W.A. Unfortunately, Eazy-E passes away due to complications from HIV before the band can reunite. Dr. Dre and Ice Cube continue to enjoy success in their individual endeavors.

Long Ending:
This biopic follows the journeys of the three primary members of seminal rap group N.W.A. It begins pre-fame in the poor city of Compton, California. Eric Wright, aka “Eazy-E,” (Jason Mitchell) is a drug dealer who is increasingly disenchanted with the dangers of his career. Andre Young, aka “Dr. Dre” (Corey Hawkins) is a  DJ, but faces opposition to his rap dreams from both his mother, girlfriend/mother of his child, and the owner of the club where he works. O’Shea Jackson, aka “Ice Cube” (Ice Cube’s real-life son O’Shea Jackson, Jr.), is a talented lyricist and rapper who has yet to find major success. Eazy-E eventually agrees to pay for Dre and Cube to get studio time. After the hired talent leaves over artistic differences, Eazy-E himself takes the mike. They dub themselves N.W.A. and begin finding success in the California rap scene.

A relatively renowned marketer named Jerry Heller (Paul Giamatti) offers to represent the band. With Jerry’s guidance, N.W.A. becomes very popular and Eazy-E’s record label Ruthless Records begins to thrive. The band become iconic symbols of the disenfranchised, due largely to playing their hit song “Fuck tha Police” despite opposition from local law enforcement and even the FBI. Ice Cube is highly suspect of Jerry’s motives and business practices and eventually leaves N.W.A. The remaining band members publicly feud with Ice Cube, eventually leading to violence between the former friends. Ice Cube is very successful on his own and Dr. Dre begins growing suspicious of Eazy-E and Jerry. He eventually accepts manager Suge Knight’s offer to form a new label – Death Row Records. The move causes bad blood between Dre and Eazy-E. After Suge has Eazy-E beaten to force him to let Dre out of his contract, Jerry has to talk Eazy-E out of murdering Suge in retaliation. The relation between the former friends seems beyond repair.

All three continue to enjoy success. Ice Cube becomes a hit filmmaker and actor with movies like “Friday” and “Boyz n tha Hood.” Dre produces hit records for rising artists like Snoop Dogg and Tupac Shakur. Eazy-E continues to run his label to great success, including launching the career of rap group Bone Thugs n Harmony. After witnessing the Rodney King beating and subsequent trial and riots, Ice Cube becomes convinced that the voice of N.W.A. is needed once again. He meets with Eazy-E and says he will agree to a reunion on two conditions, Jerry not be involved and Eazy-E repair his relationship with Dr. Dre. After his girlfriend reviews the financials for Ruthless Records, Eazy-E accepts Ice Cube and Dr. Dre’s arguments that Jerry had been cheating them. He summarily fires Jerry. He then approaches Dr. Dre and apologizes for how he treated him. Dre, having become disenchanted with Suge and his violent ways, accepts the apology and agrees to the reunion.

While working on new music with the reformed band, Eazy-E collapses. He is rushed to the hospital where he is diagnosed as HIV positive and suffering from various diseases as a result. He dies shortly thereafter, forever ending the dreams of a full N.W.A. reunion. Eazy-E’s untimely passing convinces Dr. Dre to take control of his destiny. He leaves Suge once and for all to found the Aftermath record label. The film ends with clips of the actual Ice Cube and Dr. Dre continuing their success after the passing of Eazy-E. 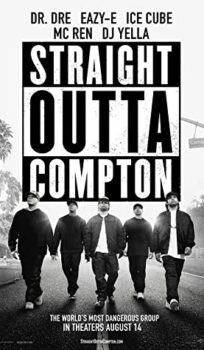