Pooper:
When he reads from a cursed book, Foo Fighter front man Dave Grohl is possessed by a demon that wants to bring a Hellish rock song into existence. The Foo Fighters complete the song before possessed Dave Grohl kills most of the band members. Although the remaining band members tried to exorcise Grohl before they are killed off by their Satan-worshipping manager, it is unsuccessful as the finished song keeps Grohl possessed forever. The demonic Dave Grohl becomes a wildly successful solo act.

Long Ending:
The Foo Fighters (all playing themselves) are working on their 10th album. As the band lacks inspiration, their manager Shill (Jeff Garlin) hires a property manager named Barb Weems (Leslie Grossman) to find a special house for the band to record in. Weems rents a house where evil demons reside. One night, Dave Grohl follows a demonic figure to a basement structure where he finds and listens to a song by a band called Dream Widow before becoming possessed.

The now demonic Dave Grohl begins forcing the band to record a 40 minute song. He also acts erratically – eating raw meat, claiming to have invented a new musical key, and ignoring supernatural events. The band grows suspicious of their front man, but continue to record the song to near completion.

After awhile, Grohl begins murdering people, including one of the band’s guitarists. Next door neighbor Samantha (Whitney Cummings) tells the surviving band members that the house is located on a portal between Earth and Hell. She explains that many years earlier, the Dream Widow band tried to record an album in the same house while dabbling in the dark arts using a cursed book. The Dream Widow front man was possessed and killed his band while trying to record a Hellish song. The front man eventually hung himself to make sure that the song remained unfinished. The band resolves to find the book (which contains an exorcism rite) and free Grohl from his possession. However, Grohl kills Samantha and two more band members after forcing them to finish recording the song.

The remaining two band members find the cursed book and complete an exorcism ritual that ends with Grohl puking out the spirit of the Dream Widow front man. The spirits of the Dream Widow band then drags their evil front man to Hell. The trio are then attacked by Weems and Shill, who are both satan worshippers. Weems and the remaining living band members are killed in the struggle. Shill explains that with the song recorded, the possession is permanent and tells Grohl that he needs to become a solo act. The film ends by jumping forward in time to show a still-possessed Dave Grohl performing in front of a sold out crowd.

There are small roles or cameos for Jenny Ortega, Lionel Richie, Will Forte and John Carpenter. 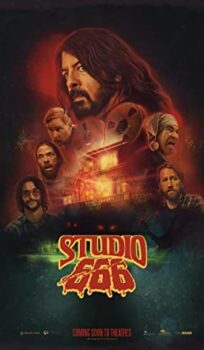