The depart of his friend and team buddy Jorge (Rayniel Rufino) upsets Miguel “Sugar” (Algenis Perez Soto) considerably, and negatively affects his pitching abilities.  To make matters worse, a fellow pitcher from back home, Salvador (Kelvin Leonardo Garcia) is brought into the team, which seems to pose a threat to Miguel’s future.  He even makes the mistake of taking steroids, which has a temporarily good effect, but one night, during a game, he almost hits a batter from another team and the guy’s angry reaction causes a collective fight.

Despondent about his descent and weighed down by his sense of loneliness, he deserts from the team and leaves Bridgetown to go to New York and find Jorge.  There, he embarks on a series of minor jobs to gather enough money to keep sending to his relatives in the Dominican Republic, while his mother and other acquaintances related to his original baseball deal talk him into returning to what he is good at.

Eventually, he finds Jorge and joyfully reconnects with him.  Jorge informs him about a small baseball league he is playing with, in which there are players from many different Latino nationalities, ages and physical shapes.  Miguel is accepted as part of this team, which makes him happy, since he was able to somehow keep doing what he knew best and even find a place within a good new crew, even if he had to slightly veer away from his original path. 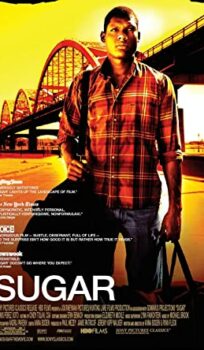