In this sequel to the 2004 acclaimed documentary, filmmaker (and host) Morgan Spurlock tackles chicken-based restaurant products as the apparent new, appealing alternative for eating out, massively touted as “healthier, more wholesome, organic, no longer fried, humanely raised and processed”, etc.

He sets out to unearth the truths surrounding the multi-billion-dollar chicken industry (barely tapped in the original Super Size Me documentary since the focus was on burgers). After extensive consulting with several marketing advisors, including (and especially CCD Innovation) for the idea and possibility of a chicken sandwich restaurant, he discovers how virtually impossible the Big Chicken industry has made it for anyone to start a chicken-raising venture since the five major ones (Tyson, Sanderson Farms, Pilgrim’s Pride, Koch, and Perdue) hold the monopoly on a tight leash and conduct unethical practices that all but keep any chicken farmers out there perennially indebted to them and strictly under their total control.

Nonetheless, with the help of Alabama-based farmer Jonathan Buttram and his family, and after some extensive research, Morgan starts his own little chicken-raising facility, which he calls MORGANIC. Eventually, his chickens reach the 6-week mark of suitability for being slaughtered and processed. Along the way, he tries every known trick compatible with “a healthier version of a chicken” (even the range-free trick; setting up a little fence barrier in the open, outside of his warehouse, for the chickens to roam in a small outdoor space).

We come to learn that what we see advertised as “healthy chicken” is not even really assessed and/or approved by the USDA -they don’t have neither the resources nor the care for it-. Also, because of the assistance, he provided Morgan for his project, Farmer Jonathan finds himself blackballed by the industry, unable to obtain new batches of chickens to raise. Moreover, a certain Tom Super discloses Morgan’s project to the media, making him look like being on some big crusade to bring down Big Chicken; Morgan obtains a copy of the said release, which details even the steps taken throughout the film (trying to obtain a loan, finding/leasing a suitable facility,…).

In time, having acquired an abandoned, former Wendy’s restaurant as the intended location for his restaurant, Morgan pulls all the necessary stops and opens what he names “Holy Chicken”, promising to be a revelation in offering healthy, humanely-treated, wholesome chicken sandwiches. The restaurant opens to huge anticipation and apparent overwhelming success; Morgan even tries to invite Tom Super to the opening, for which he attempts to bring Super a personal invitation, but this is kiboshed by Super’s assistant.

The big, mind-blowing revelation, which is the culmination of Morgan’s project and his true intention all along, is that his chicken sandwiches were no different than from any other franchise; yet, he went through the trouble of researching and disclosing (by means of big, flashy announcements on the restaurant’s walls) what everyone else wouldn’t care or dare to tell the public about current fast-food practices. Nonetheless, everyone is highly supportive of the project, to the point of being sold out.

Title cards at the end show that Morgan received, shortly after, offers for franchising Holy Chicken and he appeared as a key speaker in industry-related conventions; Super never showed face -as expected from a politician protecting big corporate interests-; and there was an ongoing lawsuit against Tyson, launched by a group of independent chicken farmers, for their unscrupulous practices. 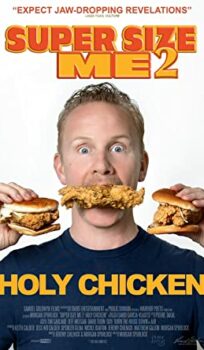