Filmmaker Morgan Spurlock (who is also the host) decides to undergo a drastic experiment that has him eat, over a 30-day period, nothing but McDonald’s products; all the while, consulting and cross-checking the progress of his experiment with a Cardiologist, a Gastroenterologist, a General Practitioner, a Personal Trainer and a Dietist. They (as well as his then-girlfriend, now ex-wife, Vegan Nutritionist and author Alex Jamieson) all express sincere concern over this and the short and long-term consequences it could have on Morgan’s health.

Intertwined with the experiment, we see depictions of the contemporary corporate influence of fast food, to the point of encouraging poor eating habits overall, in the name of the billions it brings the industry; also, critiques from experts towards the epidemic proportions obesity and bad-eating-related health problems have reached; lawsuits brought upon giants like McDonald’s for misinforming about the consequences of constant consumption of these products (comparable to what was brought upon the tobacco companies); and, to an extent, the aftermath of how the release of Morgan’s findings forced the fast-food big names to be more open about what they advertise, in terms of nutritional and caloric content.

At the beginning of the experiment, Morgan shows himself to be physically above-average, with overall good levels of everything. Part of the conditions of his crusade were: do all three meals a day at McDonald’s throughout the whole month; have, at least once, every menu item available; not eat anything else from elsewhere, not even the wholesome Vegan food Alex made; and, whenever and only if offered, accept to have his meals Supersized (hence, the movie’s title).

By Day 2, he was already experiencing discomfort to the point of vomiting halfway through a meal. By Day 5, he starts experiencing depression, lethargy and headaches and has gained 10 pounds (but he keeps going, despite medical advice not to do so). By Day 21, he had developed heart palpitations and Alex complained that he had even lost his sex drive. All the while, he had limited his exercising to just walking “the bare minimum an average person would walk per day”, in order to prove his point.

He does make it to the end of the 30-day course, but the experiment had taken a tremendous toll on him. All four Doctors agreed that he had consumed as much fast food as a normal person would over an 8-year period. He ended up gaining close to 25 pounds; his cholesterol and liver function values were negatively affected; and it took 14 months of a strict, closely-supervised Vegan diet by Alex for him to return to his pre-experiment levels.

As an epilogue, we see the rhetorical question “Who do you want to see go first, you or them?”, asked, as a jab to the anti-influence this greedy, corporate approach to nutrition has turned out to be. Also, how some food items such as salads can turn fattening if the consumer overdresses them too much. And how McDonalds, shortly after the film’s release, abolished the Super Sizes and tried to emphasize healthier menu choices at their stores (although, of course, they publicly alluded one happening had nothing to do with the other). 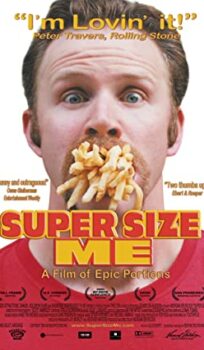