SHORT VERSION: Frank/The Crimson Bolt and Libby/Boltie eventually launch an assault on Jacques’ ranch intending to free Sarah by force. Libby quickly gets killed, but Frank single-handedly kills Jacques’ henchmen and ends up stabbing Jacques to death, and he takes both Sarah and Libby’s body back home (what he does with Libby’s body is never explained).

Sarah stayed with Frank for a couple of months afterward, but ended up leaving him for good. She turns her life around, though, finishing school and overcoming her drug addiction, and she gets re-married to a good man and has four children with him. Frank becomes a part of the kids’ lives as their “Uncle Frank.” Frank remarks that, through all of this, he believes that Sarah was God’s true chosen one, not him, and that’s why he needed to save her.

Frank gets a pet rabbit, since he had earlier heard that they make great companion animals, and the wall where he keeps the two drawings of his happy memories is now loaded with all sorts of drawings of happy memories, and he cries as he looks at his drawing of Libby.

LONG VERSION:
After Libby/Boltie (Ellen Page) saves Frank/The Crimson Bolt (Rainn Wilson) from two of Jacques’ (Kevin Bacon) henchmen one day, Frank tells her that they need to get Jacques, but they will need better weapons. Since she has grown attracted to Frank, Libby offers to make out with him, but he turns her down, saying that he is still married to Sarah (Liv Tyler). Over the course of the next few days, they go to a hunting store and buy a bunch of guns and other weapons as well as two bulletproof vests, get some practice in at a shooting range, and create a few homemade weapons such as pipe bombs.

One night, Libby approaches Frank while dressed as Boltie and encourages him to make out with her in his Crimson Bolt costume, rationalizing that he wouldn’t really be cheating on Sarah if they made out while in their superhero identities. When he refuses, she jumps on top of him, puts his mask on for him, and rapes him. This ends up disgusting him so much that he shoves her off and then runs to the bathroom and vomits. Suddenly, he sees an image of Sarah’s face form in the vomit and call out his name, and he takes this as a sign that she must be rescued now, and he tells Libby about as much.

Frank and Libby sneak onto Jacques’ ranch and start killing off a few of the guards one by one, but they get the attention of all the remaining guards after Libby uses a pipe bomb on one of them. They find Frank and Libby and shoot at them, and Frank takes a bullet in the chest, but his bulletproof vest saves him. Unfortunately for Libby, she gets a bullet in the head and dies instantly. Her death sends Frank into a rage, and he proceeds to single-handedly wipe out the rest of the guards as he makes his way inside the house.

He eventually runs into Jacques, who throws Sarah at his feet seemingly as a gesture of surrender. However, as Frank is distracted with tending to her, Jacques shoots him twice in his right arm, making him fall to the floor. Before Jacques can kill him, though, Frank shoots a blade projectile from his wrist into Jacques’ genitals, causing him to collapse in agony. Frank then pins Jacques against a wall and takes out a knife, and after delivering a final monologue, he stabs him to death while a horrified Sarah watches. He then puts both Sarah and Libby’s body into a van and drives home (what he does with Libby’s body afterwards is never explained).

In the scenes that follow, Frank narrates to the viewer that he knows that he probably looks like a psychopath to them, but he doesn’t care; the truth was in his heart, and he followed it, and he saved Sarah. She stayed with him for a couple of months afterward, but he believed it was most likely because, since he saved her, she felt obligated to do so. She ends up leaving him for good, but she turns her life around, finishing school and overcoming her drug addiction, and she also uses her experiences to help others with similar problems. She also remarries and has four children, and Frank becomes a part of the kids’ lives as their “Uncle Frank.” Frank remarks that, through all of this, he believes that Sarah was God’s true chosen one, not him, and that’s why he needed to save her. He also says that, if he and Libby didn’t save her that night, her children probably never would’ve existed, and maybe – if all of us are lucky – those children will be the ones who will change the world.

Frank – who now has a pet rabbit, because he had earlier heard that they make great companion animals – is then shown looking at the wall where he keeps his drawings of his two happy memories, but we see that the wall is now loaded with drawings of his adventures during the film, drawings that Sarah’s kids have given him, and other drawings that he made. As he looks at his drawing of Libby, a tear rolls down his cheek. 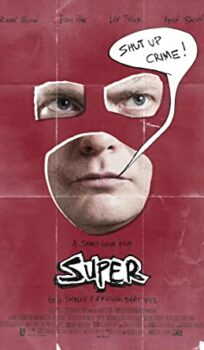