After a lot of heavy, meaningful, art-house indie developments, Caden (Philip Seymour Hoffman) finally begins to grow weary of directing his life as a play in an old airport hangar. Ellen (Dianne Wiest) offers to switch roles with Caden — she will be Caden and he will be Ellen, the lady who cleans his ex-wife Adele’s (Catherine Keener) apartment. Caden begins wearing an earpiece so Ellen can direct everything that he says and does, down to the smallest detail.

Time passes, it is revealed that Adele eventually dies of lung cancer, and Caden eventually wakes up one morning to find that the hangar has been abandoned by everyone except for the actress who played Ellen’s mother in a flashback scene. The two have a deep, meaningful conversation about death and why Caden has been doing all this, and it becomes clear that Caden is tired and may be ready to embrace death at last.

The movie ends with Caden being directed, by Ellen, to die. And the screen fades to white. 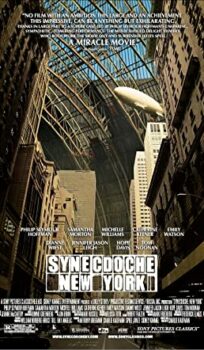