Scapegoated by the CIA, Barnes (George Clooney) is killed while attempting to warn the would-be reformist Prince Nasir (Alexander Siddig), that he is being targeted by the CIA (because he would have sold oil rights to the Chinese and not the Americans.) The Prince and his family are all killed in the same US missile strike, the strike is overseen by Barnes’ own supervisor and friend Franks.

The Prince’s morally bankrupt brother Meshal succeeds to the Emirate backed by Whiting (Christopher Plummer), an oil company magnate and makes a deal to let them into the country. Woodman (Matt Damon) who was able to use the accidental death of his eldest son to become a key advisor to Prince Nasir, survives the strike and returns home to his family though it is uncertain if he and his wife will reconcile.

Holliday (Jeffrey Wright) is hired by Whiting to investigate, before the Dept. of Justice, any illegal activities that led up to the small oil company Killen acquiring the rights to the Khazistan oil fields, so that fall guys can be found before the merger of Killen and the bigger oil company Connex. He does so and the merger goes through as planned.

The two unemployed (laid off because of the merger) and mistreated Pakistani youths join a fundamentalist group and blow up the tanker of the newly merged oil companies (and themselves) with the missing missile that Barnes couldn’t get anyone at the CIA to care about. 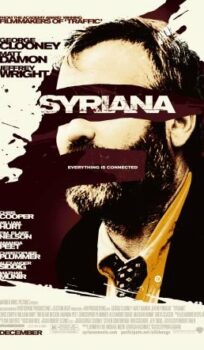