Hoagie (Ed Helms), Bob (Jon Hamm), Chilli (Jake Johnson) and Kevin (Hannibal Buress) spend a good chunk of the movie trying to tag Jerry (Jeremy Renner), but he always seems to get the upper hand, foresee the scenarios -think Robert Downey Jr. in “Sherlock Holmes”!- and effectively elude them.  As an insurance, he even gets them to agree not to be sneaky and try to tag them during any of the wedding-related events, to which they reluctantly abide.  On top of everything else, Jerry’s fiancée, Susan (Leslie Bibb), reveals she is pregnant.

Matters come to head when the group finds out Jerry attends AA meetings at a local church, so they head there to try to tag him; but, again, he evades them and takes shelter in the storage room.  After hours of waiting for him to come out, Susan appears, berates everyone for the stupidity of this endeavour and then appears to go into labour way too soon.  Jerry emerges, harshly brushes the group off and goes to the hospital.  Then, an announcement is made -via Instagram- that the wedding is off due to the fear of a miscarriage.

Anna (Isla Fisher), Hoagie’s wife, is suspicious of the whole matter, does a bit of in-depth research and discovers that it was a ruse, to deter the group from tagging Jerry.  Furious, they all crash the wedding (FURTHERMORE, SUSAN IS STILL PREGNANT AND SAFE) and Hoagie takes a lunge to tag Jerry during the final husband/wife pronouncing, but instead tackles down the Pastor (Sebastian Maniscalco) and passes out.  Anna confirms that is not a joke and Hoagie is hospitalized.

It is then when we come to discover that, in reality, Jerry was not quitting the yearly tag team but, instead, Hoagie has liver cancer and wanted to go for what he feared might be his last run of the game with his friends.  When Jerry sees this, he gives in and finally lets himself be tagged, to give him the pleasure.  However, they restart the game, allow Anna and Rebecca (Annabelle Wallis) -the journalist who followed the group from the beginning- play too, and run after each other around the hospital.

The movie ends showing a picture of the real-life group, who are all still alive and continue playing the game yearly up to present day. 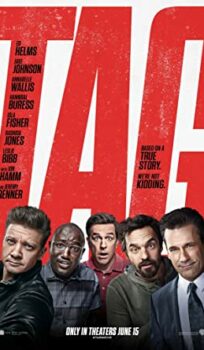