Bryan (Liam Neeson) is a former spy, with a failed marriage and a daughter, Kim (Maggie Grace) he adores. He gives her permission to go to Paris with a friend, even though he worries that it isn’t safe. No sooner do the girls arrive in Paris, they get assaulted and kidnapped by thugs. Kim is on the phone with Bryan during the assault and manages to give information about her captors before being abducted.

Through his agency contacts, Bryan discovers the kidnappers are part of an Albanian mob which run a prostitution racket (they kidnap girls, drug them, and sell them in slavery). With a 96-hour window before the victim disappears, Bryan travels to Paris. He tries to get help from a former French colleague now working a police desk job, but the guy refuses; Bryan later learns that said friend knows about the prostitution ring and he’s getting paid off to keep quiet.

Once there, he starts working his way up in the mob, severely beating and killing everyone he comes across involved in the racket. He tries to get help from a former French colleague now working a police desk job, but the guy refuses; Bryan later learns that said friend is part of the mob, and is getting paid off along with the rest of the force to keep quiet.

Bryan finds the Albanians’ hideout, kills them all and finds his daughter’s friend’s corpse, overdosed on drugs.

From the lone survivor he learns that virgins like his daughter are more valuable, and she is to be auctioned off to some rich bigwigs at a posh party. Bryan breaks in as his daughter is being sold, and forces the Arab buyer to give the highest bid, but he is captured. Before he can even be tortured though, he breaks out, kills everyone and chases his daughter to her buyer, a rich sheik leaving Paris on a yacht.

Bryan boards the boat, kills everyone and rescues his daughter. They return to America, where Bryan introduces Kim to a pop star he had protected earlier on a bodyguard job, to help her realize her dream of being a singer. 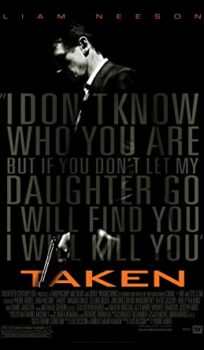