Pooper:
The night ends with many deaths, and the town threatened by killer-pumpkins.

The Night Billy Raised Hell (Saw II-IV and Repo! The Genetic Opera’s Darren Lynn Bousman) – A young boy in a devil costume is pressured into pranking the owner of a creepy old house. The owner of the house catches him in the act and pulls the boy inside, revealing that he is the real Satan. Satan then leads the costumed boy through the town, convincing him to play all manner of often deadly tricks on the townsfolk and attracting the attention of the cops. Satan and his accomplice returns home and the “child” removes his mask to reveal it was one of Satan’s imps dressed in the boy’s costume. Satan releases the boy who is then shot by the police (who believed he was the one who wreaked havoc that night).

Trick (Night of the Demons remake’s Adam Gierasch) – Four adults are handing out candy while drinking and getting high. They are soon attacked and eventually murdered by a bunch of kids in Halloween costumes. It is revealed that the adults had long been abducting, dissecting and eating children and the kids arrived just in time to free their latest victim.

The Weak and the Wicked (Grace’s Paul Solet) – The streets of the town are run by a malicious young woman and her two henchman. They are taunted by a heavily scarred teenage boy and a chase ensues. They catch the boy and the young woman realizes that years ago (as little kids), she and her henchmen burned down this boy’s trailer with his parents inside. She mocks the boy and has her henchmen beat him up. The two henchmen are attacked by an invisible force. The boy reveals that the scars are from satanic rituals he conducted to summon a demon to help him get his revenge. The demon appears and eats the woman as her blood spatters the boy’s face.

Grimm Grinning Ghost (Centurion’s Axelle Carolyn) – At a Halloween party, a woman is told the story of a disfigured ghoul who murders any human who catches sight of her. The rest of the segment essentially is one long, tense build-up to a jump scare. Eventually, the ghoul appears and kills the woman.

Ding Dong (May and the Woman’s Lucky McKee) – A year ago, a wife weeps at Halloween that she is childless. When her husband apologize, she turns into a demon and beats her husband. The next Halloween, the wife takes a different approach, welcoming the trick or treaters in hopes of kidnapping one of them. The husband eventually stops her from taking one young boy and again is beaten by his demonic wife. He tells his wife he got a vasectomy to ensure she would never procreate, so the wife throws him in her oven. As the husband burns to death, his wife also melts. It is intimated that the husband is “Gretel” from Hansel and Gretel and his wife is the evil witch from the story.

This Means War (Never Sleep Again’s Andrew Kasch) – A man takes pride in his very traditional family-friendly Halloween decorations. To his horror, a heavy metal musician moves next door and decorates his house in a gory fashion. The man confronts his new neighbor and a fight breaks out, much to the enjoyment of the rest of the block. The pair eventually are fatally impaled when they fall onto a wooden stake.

Friday the 31st (Big Ass Spider’s Mike Mendez) – A masked and deformed killer (ala Jason Voorhees) takes out a female victim with a spear to the chest. When he goes to retrieve her body, a tiny alien beams down and says “trick or treat.” The killer, having no candy, eventually smushes the alien beneath his foot. The alien is not dead and instead, possesses the body of the killer’s victim. An epic fight breaks out in which the killer is eventually fatally decapitated, while the alien leaves the victim’s corpse and resumes its pursuit of treats.

The Ransom of Rusty Rex (Abominable’s Ryan Schifrin) – Two hoodlums lie in wait outside of a millionaire’s home. They intend to kidnap the millionaire’s son, and succeed in their plan. When they attempt to ransom the child, the millionaire simply ignores their threats. They eventually learn the son is, in fact, an immortal child-sized demon. By kidnapping the demon, the kidnappers are now bound to it instead of the millionaire. The kidnappers try to kill the demon several times, and believe they have succeeded in their final attempt. Some time later, one of the kidnappers finds his partner being eaten by the still-living demon-child.

Bad Seed (Dog Soldiers and the Descent’s Neil Marshall) – After carving a Jack-o-Lantern, the pumpkin springs to life and bites off the head of its creator. The Jack-o-Lantern then sprouts tendrils that allow it to crawl and it wreaks havoc on the town. A police officer eventually locates and kills the Jack-o-Lantern. She then visits the laboratory that produced the pumpkin, only to find that it has produced thousands of other living, homicidal pumpkins. 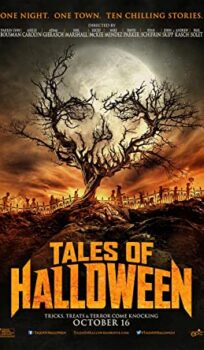