Rebecca/Tank Girl (Lori Petty) and Jet Girl (Naomi Watts) end up seeking allegiance from the Rippers in order to rescue Sam (Stacy Linn Ramsower) from Water & Power, and they secure it after stealing a supposed shipment of the company’s weapons for them. However, when the Rippers open the crates, they discover that one of them contains the corpse of their creator, Johnny Prophet. Wanting revenge, they, Rebecca and Jet Girl start planning an assault on Water & Power’s headquarters.

Rebecca blows her way through the front door with her tank and causes pandemonium, enabling Jet Girl and the Rippers to infiltrate the place via the hangar bay with her jet, and Rebecca joins up with them inside. Kesslee (Malcolm McDowell) witnesses Rebecca’s arrival and decides to kill Sam by sticking her in a pipe and slowly filling it with water to drown her.

After Jet Girl spots the complex’s main power boxes a distance away and wonders how they can get to them without the soldiers spotting them, Deetee (Reg E. Cathey) runs right for the boxes and succeeds in destroying them, but the soldiers shoot him to death. This subsequently whips the other Rippers into a frenzy, and they begin to decimate the soldiers. As this happens, Kesslee tricks Rebecca into coming to him by making his voice sound like Sam’s and crying out for help. He tells Rebecca that Sam is being drowned in a pipe, and then he grabs hold of her and reveals that he knew of this whole assault beforehand because he had microphones planted all over her body during her earlier imprisonment.

Rebecca gets the better of him momentarily, but when she attempts to punch him in the head, his head is revealed to now be holographic. He then gets the upper hand on her, but before he can kill her with his robotic arm, her tank shows up and fires a shot that brings down a metal walkway. Rebecca knocks him into it, causing his arm to get stuck in it, and she gets into her tank and starts shooting beer cans at him, since she is out of ammo. Rebecca ends up shooting a can above his head, which hits a bucket of water and dumps it on top of him, short-circuiting his technology. She then gets out and sticks one of his own bodily water extraction devices into him, sucking all of the water out of him and killing him. She then rescues Sam. Meanwhile, Jet Girl finds Sgt. Small (Don Harvey) while he is trying to escape and kills him, getting revenge for all of the abuse he inflicted on her while she was a prisoner.

A group of soldiers stop Rebecca and Sam from leaving, but Booga (Jeff Kober) then appears behind them and reports that they have complete control of the complex. Rebecca kisses him, and then – through an animation sequence – the heroes destroy Water & Power and release all of their water into the world. 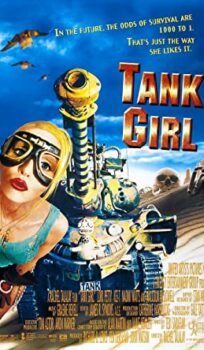