Six BASE jumpers fly a helicopter into a Australian national park illegally, to jump off a cliff. Stone (Olympic athlete Apolo Ohno), crash lands and falls through an opening into an underground crevice. His blood drains into a channel, where it awakens dormant creatures.

Three park rangers arrive, and arrest the surviving jumpers. As they are driving back in the dark, their truck is attacked by the creatures. The creatures are not affected by gunfire. Ranger Alex (Danica McKellar) reveals that these are tasmanian devils, legendary creatures summoned by the aboriginals to kill invaders.

One of the jumpers rigs a flame thrower using gas from the truck. They are able to kill creatures with it. They are killing off creatures, but one by one, they are getting killed off also.

The only two who survive, are Alex, the female ranger, and Jayne (Kenneth Mitchell), one of the jumpers. They make plans to go to dinner, apparently indifferent to the deaths of their friends and co-workers. 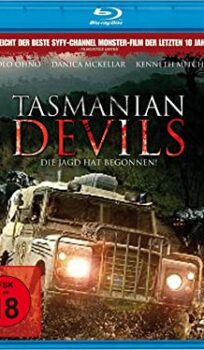