Teenage Mutant Ninja Turtles: Out of the Shadows(2016)

Teenage Mutant Ninja Turtles:
Out of the Shadows
(2016)

After Shredder assembles the three parts to the dimensional portal generator, he betrays Baxter Stockman and has him taken back to him facility in Tokyo. Krang arrives through the portal with the Technodrome assembling itself piece by piece.

Shredder meets Krang to celebrate the takeover of Earth, but Krang betrays Shredder and has him imprisoned with several other frozen beings inside the Technodrome.

Donatello figures out that the Technodrome pieces are following a beacon that needs to be sent back through the portal in order to send Krang and the Technodrome back to Dimension X. Meanwhile, April and Casey must subdue Bebop, Rocksteady, and Karai in order to deactivate the device and close the portal.

While Leonardo and Raphael fight Krang, Michelangelo manages to get the beacon and is immediately grabbed by Krang, who proceeds to crush him. Donatello (in an act of sheer nerdy badassness) deactivates Krang’s robotic body by sticking his electrified bo staff into the neck of the body. The beacon is then attached to a remote control drone and sent back through the portal, dragging the Technodrome pieces with it.

Casey defeats Bebop and Rocksteady by locking them in a cargo hold with a live grenade. The two survive the explosion. Casey and April defeat Karai and close the portal, sending Krang and Shredder to Dimension X for good.

The turtles are commended with keys to the city by Bureau Chief Vincent, but choose to remain in seclusion from society. 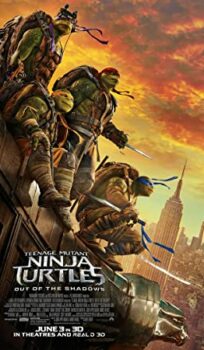