At a young age her step-brother’s finger is nearly severed when he goes to touch her and from then on Dawn is a devout Christian and swears virginity until marriage.

Her brother grows up refusing vaginal intercourse and secretly wanting to sleep with Dawn, resenting his father for making her his sister.

After giving a speech on purity she meets Tobey whom she instantly develops a crush on and they begin courting and one day after resisting her urges they meet up at lake and starting making out. Underneath a waterhole in what is obviously a lover’s lane type area Tobey get’s frisky and tries to force himself on her. Dawn’s vagina dentata bites his penis off and he swims away in agony leaving the penis behind as Dawn is horrified.

She goes home and not wanting to bother her sick mother with her concerns, she rides her bike to a creepy gynecologist who takes off his glove, squirts on some lubricant and inapproriately shoves his hand in her. When she gets uncomfortable and starts to feel pain and the doctor will not retract his digits her vagina bites them off. He screams and she runs away.

Distraught over her monstrous vagina Dawn is increasingly withdrawn and her schoolmate Ryan who has a crush on her attempts to console her.

Oddly enough, after drinking with him one night she allows him to have sex with her and her vagina does not eat him. Dawn enjoys the sex and finally thinks she’s found her mate.

During a night of intercourse Ryan’s friend calls and he starts bragging about doing it with her right then. She get’s pissed and her vagina automatically castrates him.

She leaves to find out her mom has gone to the hospital and died because her brother did nothing to help her after she had fallen gravely ill.

Dawn, knowing her brother has been saving himself for her, goes home and allows him to sleep with her and the obvious occurs.

Knowing she cannot stay in town Dawn hits the road and begins hitchhiking and is immediately picked up by a creepy old dude.

The film ends with her smiling knowing that if anyone tries to rape her they will receive a severe punishment. 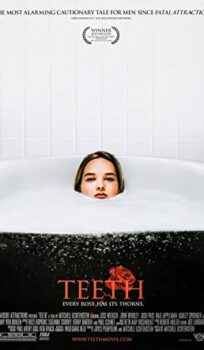